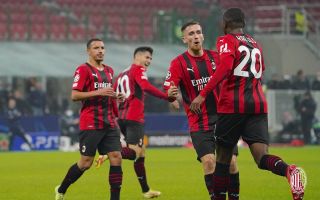 AC Milan 1-1 Porto: Rossoneri battle back for a draw but fall short in must-win game

AC Milan’s hopes of qualifying for the knockout stages of the Champions League are all but over after they were held to a 1-1 draw by Porto at San Siro.

It was certainly a game of two halves for Milan as they were dominated in terms of chances in the opening 45 minutes, after Luis Diaz’s opener in the early stages had very much set the tone with Sergio Conceicao’s team looking sharper and more dangerous.

The Rossoneri did get themselves level in the second half through substitute Pierre Kalulu, with the Frenchman producing a tidy finish from a narrow angle to keep the hopes very much alive. However, the winner never came despite all the pressure.

The result means that Milan are still without a win in their opening four games and it is virtually impossible for them to qualify for the knockout rounds, as they would need to win against Atletico Madrid and Liverpool, hoping other results go their way.

Stefano Pioli chose to make four changes to the starting line-up from the team that beat Roma as Alessio Romagnoli came in at centre-back, Sandro Tonali came into the midfield, Brahim Diaz got the nod in the playmaker role and Olivier Giroud started up front.

Inside the opening minute there was a chance for Porto as the ball ricocheted off Tomori and fell kindly for Evanilson inside the box, but the striker could only fire into the side netting from around eight yards out as Tatarusanu was relieved.

Porto did have the ball in the net in the sixth minute and it was Luis Diaz who again got the opener. Bennacer was robbed of possession deep in his own half and he found Diaz on the left side of the box, with the winger finishing calmly under Tatarusanu and the sliding defenders.

The away side continued to cause problems for Milan who looked wide open at the back, and Diaz rolled Tomori before cutting the ball back to Otavio on the penalty spot and he should have at least hit the target.

The Rossoneri continued to give Porto big chances to strengthen their grip on the game, and they had Tatarusanu to thank as he made a fingertip save to deny a header from Mbemba at the far post.

Tatarusanu made another decisive save to stop a header from Taremi that was destined to nestle inside the far post, with the Romanian again decisive in ensuring the game remained at 1-0.

Milan got away with one again as the game ticked past the half hour mark, with a Porto corner swung in from the left and headed back across goal by Pepe, and Tatarusanu gratefully gathering as the ball bobbled through to him.

Diogo Costa then made his first save of the game as Theo Hernandez led a counter-attack and sprayed the ball wide to Giroud, who cut in onto his left foot and fired a shot that was destined for the top corner if it weren’t for the sprawling stop.

Saelemaekers had a big opportunity to draw Milan level just before the break and it was again through a Theo-led counter-attack that the chance was created. He fed Leao down the left and his cross found the Belgian at the far post, who massively shanked his effort over.

There was a change at half-time as Pierre Kalulu came on in place of Davide Calabria, who had been terrorised in the first half by the electric Luis Diaz.

Milan came out determined to get themselves on level terms and Leao should have found the back of the net after rounding Costa and shooting first time, instead finding the side-netting but with the offside flag up anyway.

It should have been 2-0 to Porto as Pepe again caused a problem in the box with a header back into a dangerous area from a position at the far post, though Evanilson crashed a header onto the crossbar from six yards out that he should have done better with.

On the hour mark it was Milan who drew level, and it came from the substitute Kalulu. A Bennacer free-kick from 30 yards out hit the wall and trickled through to Theo, whose shot was saved but into the path of the full-back, who tucked the ball in from a narrow angle.

A double change came not long after the goal as Franck Kessie and Rade Krunic came on, replacing Tonali and Brahim Diaz.

Porto could have gone 2-1 up just inside the final 20 minutes as Luis Diaz got in isolation and fired in a cross that Tomori half cut out but allowed Taremi to seize possession and curl a shot narrowly wide of the angle between post and bar.

With 15 minutes left on the clock the obvious change was made as Giroud made way for Zlatan Ibrahimovic, fresh from his decisive performance on Sunday in the capital against Roma. His impact was almost instant as twice balls went towards his runs in behind but he was denied by the onrushing Costa and the offside flag.

The Swede did have the ball in the net but again the offside flag would thwart him, this time because Hernandez had strayed a few yards before receiving the pass in behind and squaring.

Daniel Maldini came on in the closing stages but was not given much time to make an impact as the game filtered out to a 1-1 draw that ultimately ends Milan’s hopes of qualifying.