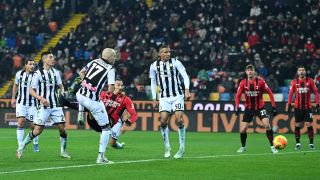 Zlatan Ibrahimovic’s goal in added time rescued a point for AC Milan against Udinese after what was another subdued performance from the Rossoneri.

It was the home side who took the lead in the first half when the in-form striker Beto finished at the second attempt following a slack pass from Ismael Bennacer that was seized and facilitated a two-on-one counter-attack.

Just as it looked like Milan were about to leave empty handed from a game where they struggled to create clear-cut opportunities, Ibrahimovic popped up in the right place at the right time to finish from close range and snatch a point.

Isaac Success saw red for Udinese in the very closing stages but the Rossoneri were unable to force a winner in the remaining time as they squandered a chance to ensure they remain top ahead of Napoli’s visit next weekend.

Head coach Stefano Pioli made four changes to the starting line-up compared to the team that lost to Liverpool in midweek as Alessandro Florenzi came in for Pierre Kalulu, Tiemoue Bakayoko and Ismael Bennacer were in the double pivot over Franck Kessie and Sandro Tonali, and Alexis Saelemaekers took Junior Messias’ spot on the right wing.

It became very apparently from the opening exchanges that the home side were happy to play narrow and compact with two banks of players, willing to cede possession to Milan and try and hit them on the break whenever the ball was surrendered.

The first moment of panic came when a ball round the back of Milan’s defence seemed to nestle into No Man’s Land between the defence and Mike Maignan, with the Frenchman rushing out to block Deulofeu from finishing before Tomori cleared.

Zlatan Ibrahimovic got his first chance of the game in the 12th minute as a dink over the top from Bennacer found the Swede in space behind the defensive line, and while the offside flag did not go up he sent a half volley comfortably over the bar.

The former Milan man Deulofeu continued to look like Udinese’s brightest player and he flashed a curling effort wide of the far post having cut in onto his favoured right foot from the left side.

It was the home side who took the lead in the 17th minute and it came from the in-form Beto. A giveaway in the midfield as Bakayoko failed to come for a Bennacer pass gave the Bianconeri the chance to counter and after the Portuguese striker saw his first effort saved by the onrushing Maignan, he settled himself and fired the rebound into the roof of the net.

A few minutes before the half-hour mark Udinese again tested Maignan as Molina’s shot from around 25 yards forced him into a backpeddling catch, with the warning signs still there that it would be far from a good night for the Rossoneri.

The best chance that Milan created in the first half came three minutes before the break as Brahim Diaz received a flick from Ibrahimovic following a ball into the box from Romagnoli, however the Spaniard skewed his first-time effort wide of the near post on his left foot.

The Diavolo had the ball in the back of the net less than a minute later when Theo Hernandez slotted past Silvestri having been put through in behind, yet the offside flag went up and the full-back was clearly a few yards offside.

Pioli pulled no punches at the interval and decided to make three substitutions to try and freshen up a lethargic line-up as  Bennacer, Bakayoko and Krunic all came off for Franck Kessie, Sandro Tonali and Junior Messias.

In the opening minute of the second half Milan generated a chance as Udinese failed to clear an aerial ball, which resulted in Florenzi crossing low to Ibrahimovic who fired over with a snapshot.

Brahim Diaz continued to get himself into good areas of the pitch but squandered the chances that came his way, with his team-mates looking on in disbelief when he shot in space on the edge of the box in the 59th minute but was closer to conceding a throw-in than scoring.

Maignan was grateful to clutch a header from Perez after Udinese whipped in a dangerous free-kick from their right side as the home side continued to look quite comfortable in their defence of a one-goal lead.

Ibrahimovic had Silvestri sprawling to make a save as he headed a Tonali cross towards the bottom corner but it nestled narrowly wide. After that chance, Saelemaekers made way as Samu Castillejo came on as the right winger.

The final change came from Pioli not long after an Ibrahimovic header from a free-kick into a dangerous area had not been capitalised upon, and Brahim Diaz made way for Daniel Maldini.

Beto had the opportunity to win the game for Udinese moments after the substitution as he bundled his way through on goal but lifted an effort over Maignan and wide of the far post.

Four minutes from time Theo Hernandez almost certainly made the wrong decision when he pulled the trigger after a loose pass was seized in Udinese’s half, with the left-back shanking his effort wide.

In the second minute of four added on at the end of the 90, Milan got the equaliser their pressure had threatened. A ball was pumped into the area and a ricochet right on the edge of the six-yard box fell to Ibrahimovic, who finished with an acrobatic attempt with his back to goal just as he did in the same fixture last season.

There was a red card in the final few seconds as Isaac Success lashed out at Alessandro Florenzi, but there was not enough time for a winner for either side.