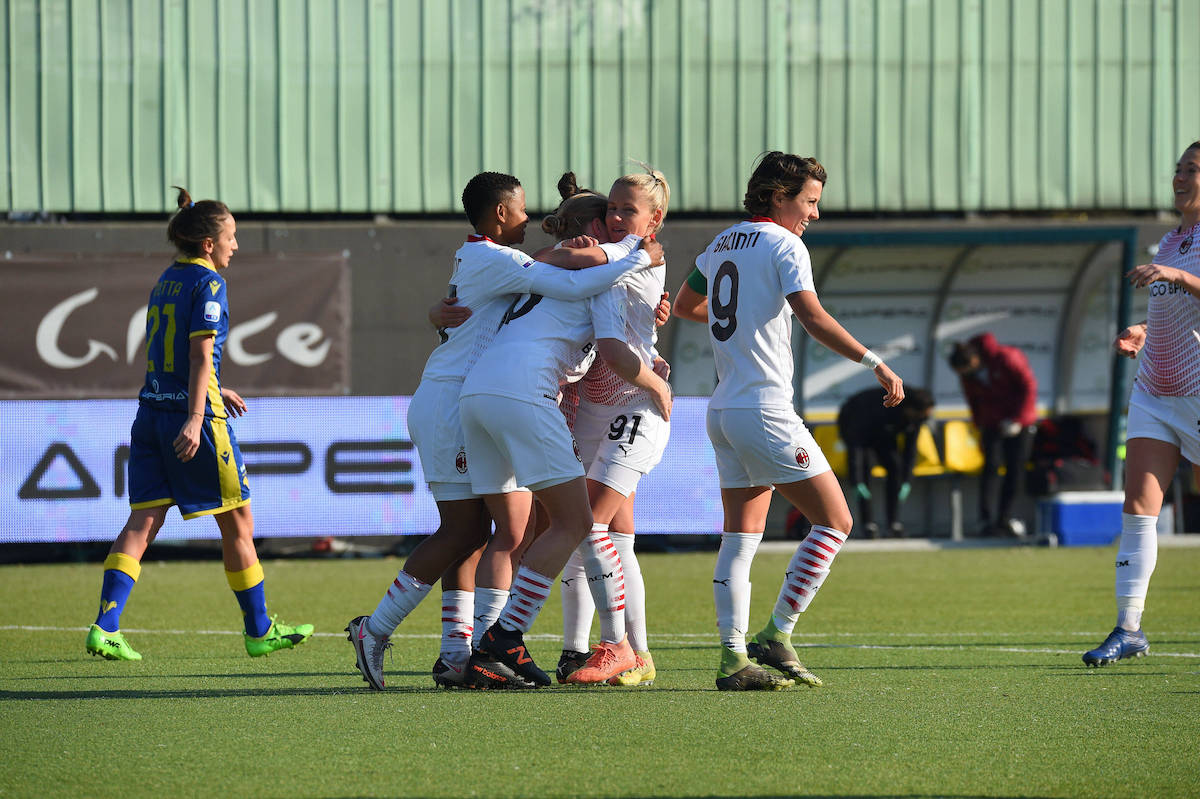 AC Milan beat Hellas Verona by a score of 1-0 last Saturday. After a hard fought match, the team were able to secure a vital victory over the Gialloblu.

Highlights of the match below …

Dowie gets her sixth goal

Natasha Dowie scored Milan’s first and only goal of the match at the 22nd minute.

The header came off of a perfectly placed assist by Linda Tucceri Cimini. The goal was also the sixth for Dowie in red and black, and with it, she became the Rossonere’s highest scoring foreigner.

It’s a feat so remarkable that even the official FIFA Women’s World Cup account celebrated it.

And with that header, Dowie made history and secured a vital win for the team. 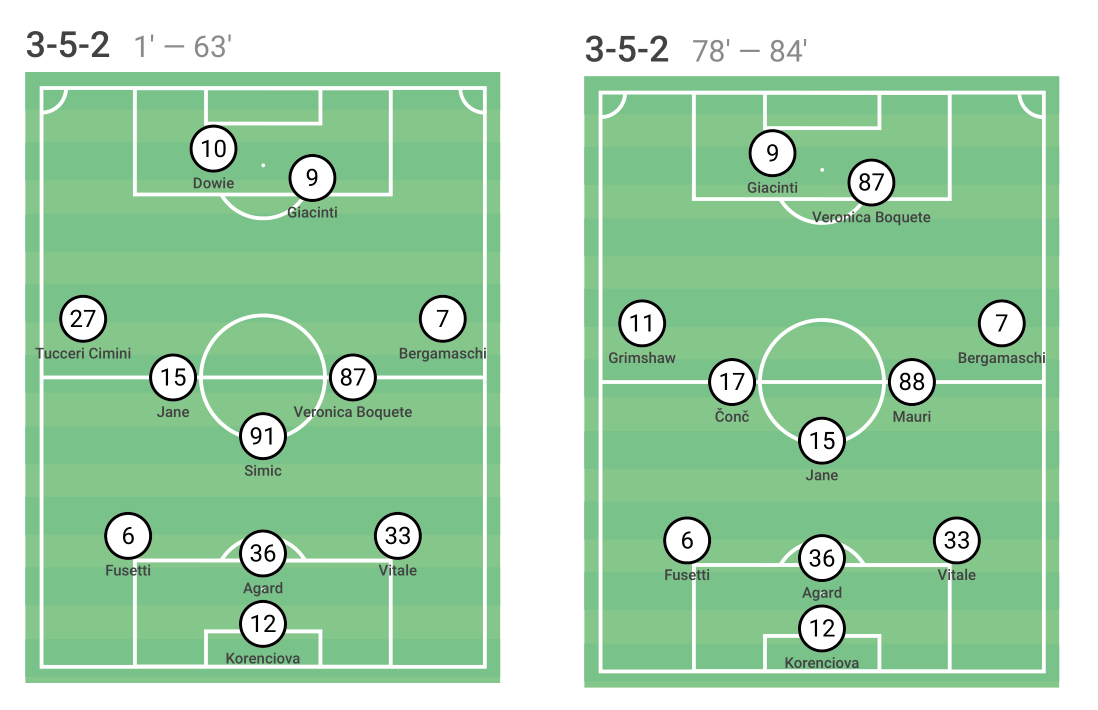 As was noted in the match preview, both teams have used the 3-5-2 as their main formations during the season.

However, Hellas Verona switched to a 5-3-2 in order to counter the Rossonere’s formation.

At times, it worked, as the Gialloblu’s defense was successful in disrupting Milan’s buildup play at certain intervals.

Though Milan was dominant and played well during the first half, they seemed to falter during the second. The team seemed to have a few mental lapses that let Verona come dangerously close to finding an equalizer.

Fortunately for the Rossonere, goalkeeper Mária Korenčiová was up to the task and calmly collected any shots that came her way. To the defense’s credit, they prevented Verona from having any shots on target. And once again, Korenčiová was able to end the match with a clean sheet. It was her seventh of the current campaign.

The most notable differences between the halves for the Rossonere came during the second half. After Natasha Dowie was substituted out of the game, Vero Boquete was pushed into a more attacking role and played as a false nine. She lead the attack alongside Giacinti and while doing so, we finally got to see Vero as the offensive threat she was meant to be.

The other players on the field benefitted from this, most notably Christy Grimshaw.

This should give coach Maurizio Ganz much to think about within the upcoming days. And hopefully, we’ll see Vero fielded in an attacking role again in the future.

As was expected, Milan were the dominant side during this match. The Rossonere attempted 20 shots at Verona’s goal, with only four of them on target. Only one of their shots was converted (and it was Natasha Dowie’s). They also had other notable stats, including 83.58% pass accuracy while maintaining 65% of the possession. 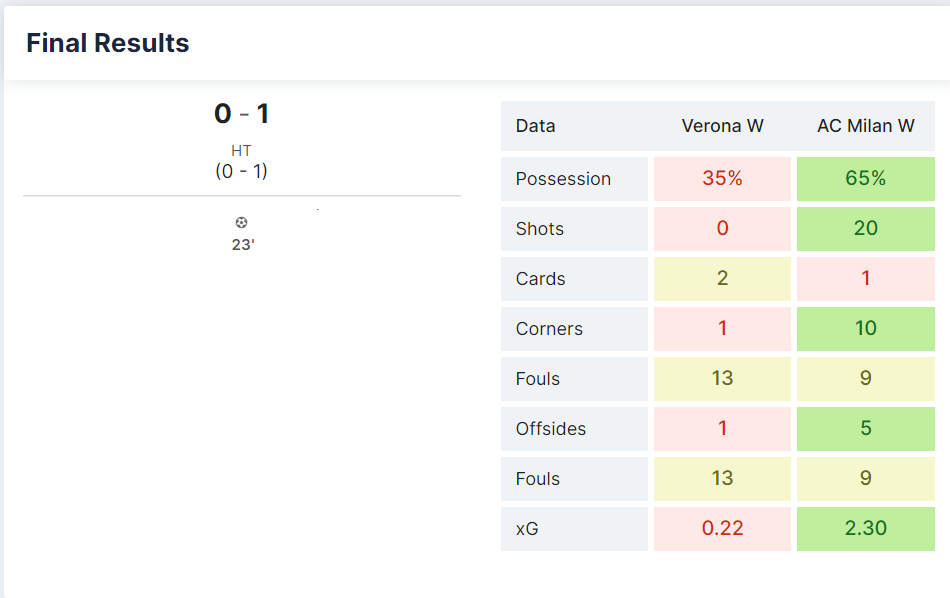 There were many standouts during this match. The MVP of the match was undoubtedly Natasha Dowie, as she deserved top honors for making history.

Other standouts of the match included Refiloe Jane, who provided both fire and steel in the midfield. Her ability to lob off a pass was quite exceptional as well.

Francesca Vitale also deserves a special mention for her defensive work. Whether it was clearing balls at the back, or making runs upfield to get back into position, the defender was a delight to watch.

Julia Šimić also deserves praise for playing their part. Šimić was part of the reason why Milan played so well and were dominant during the first half. The hope is that she’ll stay healthy enough to help Milan put on more dominant displays in the future.

Finally, one must also mention captain Valentina Giacinti. The forward fought hard to secure a win for the Rossonere, despite not getting on the score sheet herself. Her only downside during the match was the unfortunate and mystifying yellow card she got for ‘simulation’ after falling in the penalty area.

This aside, the Rossonere captain should be commended for her performance during this match.

AC Milan will play Florentia at the Stadio Comunale Santa Lucia in San Gimignano. Milan has never beaten the Neroverde in their home stadium.

The team will be looking to break their curse against the Tuscans this Sunday.