The AC Milan Women ended their Champions League journey prematurely with a 2-0 loss to the Bundesliga side, Hoffenheim.

One could blame the loss on preseason form. However, there were a variety of factors contributing to the team’s loss. Here’s a closer look at what went wrong.

Milan initially started by playing a 3-4-1-2. As the match progressed, the team shifted to a 4-4-2 and a 4-2-3-1. The latter formation only happened in the late stages of the game, after the likes of Nina Stapelfeldt and Christy Grimshaw were substituted into the game.

Hoffenheim, on the other hand, mainly stayed in a 4-1-4-1 formation. Later on in the match, they would deviate from this and employ a 4-4-2 to see out the game.

The first half of the match started off fairly even with both teams going for it. However, Milan would gradually lose the midfield and cede possession to their opponents.

Vero and Jane were their usual selves as they gave 100% for the team. Sadly, even they couldn’t do much as Hoffenheim were a much better team. The German’s technical and tactical shape were simply better than Milan’s. Both teams played a high press at the beginning, though Milan began to fall back and sit deep as they hit Hoffenheim on the counter-attacks.

Hoffenheim tried to play out of the back and managed to dictate the rhythm of the game, but Milan was very compact in the middle, as they tried to press holding midfielder (Dongus) and guide the attack to the wings.

Hoffenheim’s number ten (Gia Corley) was the conductor of the orchestra, as she dictated play for the first ten minutes of the match. She had more of the ball than any of the other midfielders. Giacinti was ineffective for large spells of the game, as Hoffenheim’s two centre-backs (Bühler and Feldkamp) did a good job of keeping her quiet. Milan also had trouble maintaining possession, as they couldn’t string passes together. The fact that they didn’t press high didn’t help.

The Rossonere tried to be compact but couldn’t do much against Hoffenheim’s positional play.

Die Kraichgauer were also belligerent without the ball. This was evident by how they won most of the duels and second balls. This led to them having possession for most of the game. On top of that, they were patient with the ball, as they roamed around the pitch from one side to another, and looked for one of their teammates to be open and to dictate the tempo of the match.

Hoffenheim, to their credit, played well, as they knew when to be patient, play wide, and pass the ball. They also knew when to play directly with balls through the middle and behind Milan’s defence.

They also played out of the back, they showed real character and calmness on the ball, as they did not panic and found ways to elude Milan’s defensive shape. Hoffenheim’s captain, Fabienne Dongus, would even move to the flanks to receive balls. She was the launchpad for most of their attacks, as she connected well with teammates Corley and Brand.

The first big chance for the German side came at the thirteenth minute. Milan tried to play out from the back but due to their opponent’s high press, they couldn’t keep the ball. Fortunately for Milan, they would not score. As a result of this, the Rossonere lost their shape and tried to break up play through technical fouls. Milan had a few chances on the counter-attack but their passing was sloppy in the final third. The two most notable instances were from Lindsey Thomas at the 15th and 22nd minute. However, Thomas’ heavy touches let her down. 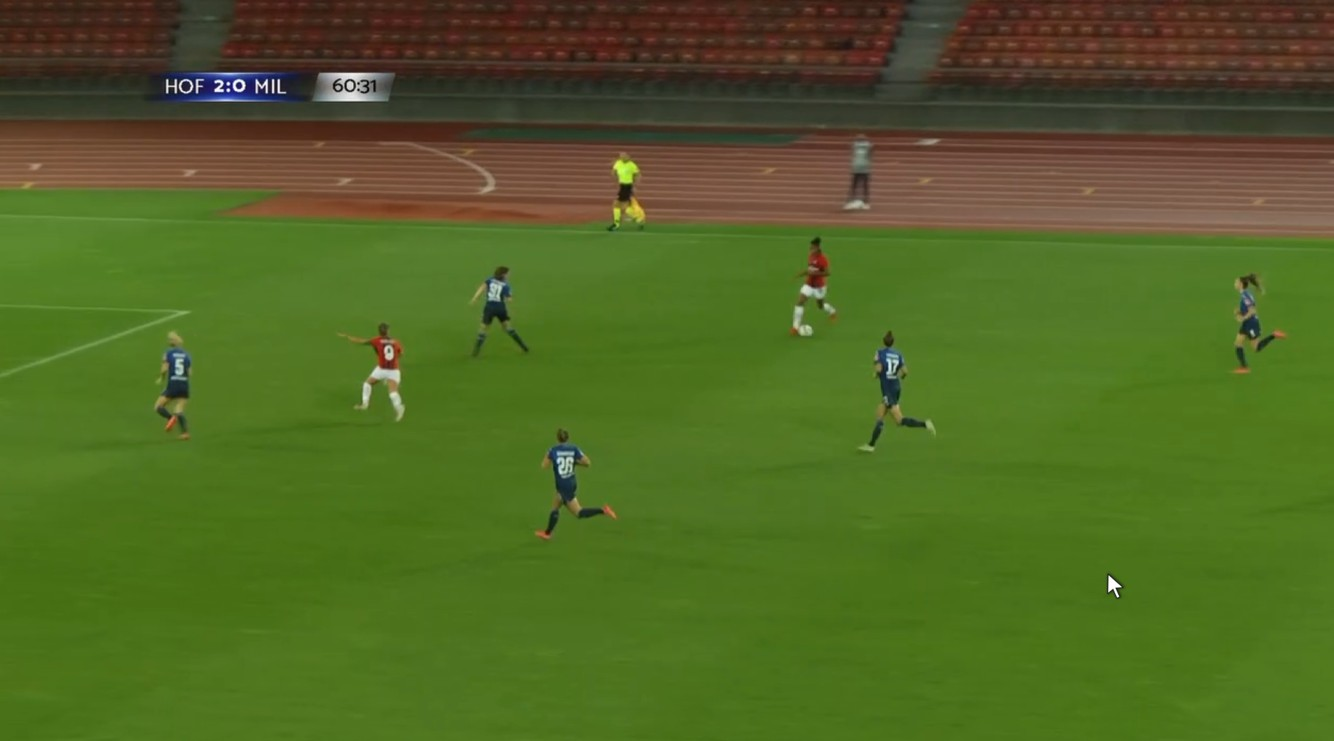 Milan had two problems with their attack. The first of which is that they attacked with only two to three players, as was demonstrated above. They attacked with fewer players, and less imagination than their opponents did. And by the time they got to the final third, they were too exhausted to make the most of any opportunities they created. This was a recurring theme throughout the game.

Giacinti was the Rossonere’s only attacking threat, with Thomas behind her on the right. However, Thomas’ heavy feet and touch let her down. That left three players in the middle, but Greta Adami didn’t do much in the game and it felt like there was one less player in the midfield.

The Rossonere had a lifeline of hope at the 19th minute when Sara Thrige found her way into the opposition’s penalty box. However, the goal was ruled offside. The only cold comfort for Milan there was that the offside may have been erroneous.

Hoffenheim, on the other hand, attacked in numbers and by circulating the ball better. Their opening goal was just a matter of time. It came at the 36th minute and via their talisman, Jule Brand. After that goal, Milan lost their heads and had trouble maintaining their defensive structure and overall shape, as they were often pinned back into their own box. They also did not aggressively press their opponents who stretched them out wide and made them lose their compact shape.

Hoffenheim played a high defensive line and were practically encamped in Milan’s half. If there was one standout for Hoffenheim, it was Jule Brand, who created a lot of problems for the Rossonere’s defence. She ran with aggression, as she made several runs behind Milan’s defence and linked up play with her teammates.

Hoffenheim’s high line and their tendency to attack in numbers left them exposed. However, Milan didn’t have the calmness needed in the final third due to a lot of aimless running in defence. As a result, that left them exhausted, and they weren’t able to capitalize on the few opportunities that came their way.

Milan started the second half more aggressively. However, they  still had no defensive block in the centre of the pitch. Dongus was, once again, left unmarked and was able to start attacks with smart movements and passing to the first available player she saw. Hoffenheim played in a clever way and the area where they shined the most was in defence. They didn’t take any dangerous risks and kept Giacinti and Vero in check.

Die Kraichgauer were also superior in numbers, as they attacked with players at full speed. This was quite evident in the second half, when the game was more open. Milan had problems with tracking back, as they were too slow and unorganized. They just couldn’t cope with their opposition.

The second goal from Hoffenheim was a consequence of the Rossonere not being able to mark the opposition properly.

Milan tried to press Hoffenheim a few times but the latter managed to find space to avoid it. Even when the Rossonere managed to win the ball back, they lacked both the ideas and the ability to be more dangerous in the final third. Ganz then substituted Fusetti and Vero out in the 63rd minute. While Laura’s substitution was understandable, the latter’s was inexplicable.

Christy Grimshaw and Linda Tucceri Cimini came into the game in their place. Milan then switched to a four at the back with Tucceri Cimini at the left, and Andersen on the right. This was done in response to Hoffenheim’s 4-1-4-1 formation, as they wanted to mirror that lineup.

The Rossonere had a few chances to score in the latter stages of the game, but not enough to jeopardize the Germans. Milan didn’t have the type of players who were good enough to make something out of nothing. Hoffenheim had both the courage and the quality to see the game through and also had the opportunity to expand their lead, particularly at the 75th and 76th minute.

Milan had a few more chances late in the game — most notably at the 80th and the 81st minute. In the end, it was too little too late and the Rossonere’s European adventure came to a premature end.

As was noted before, Hoffenheim had the majority of possession. They had 65% possession compared to Milan’s 35%. They also had an 86% pass accuracy rate and won 51% of their duels.

Hoffenheim also had eleven shots on target, including in Milan’s penalty area. They also suffered nine fouls from the Rossonere, as the latter had to resort to fouls to stop Hoffenheim’s defence.

Overall, it was a dominant display from the German squad. 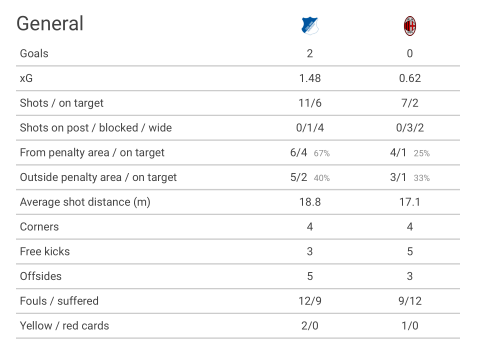 Milan still have a long way to go if they want to catch up with the best European teams. Ganz has also demonstrated his limits as a coach, evident by the way he prepared this team for the match. The team couldn’t even get the basics right and put on a poor display in Europe. One can only conclude that this was due, in large part, to how they weren’t adequately prepared for this game.

Time and time again, Ganz has proven that he is not a big game coach. Whether it was against Juventus, Roma, or Hoffenheim, he constantly gets it wrong.

Maurizio, however, will have an entire season to turn this team around. And if he doesn’t, then the team should seriously consider parting ways with him at the end of the season.
Milan’s management also needs to consider bringing in an extra midfielder and a striker. Aside from the defence, the rest of the team looks pretty sparse and will need an extra player to reinforce the thin ranks in the midfield.

The team will also need an extra forward who will not only give Giacinti a rest but to unlock tight defences when needed. One would hope that these reinforcements will come soon, or during the January window.

One also hopes that Milan will shake this defeat off and have a good season. And despite the disappointment of the loss, the Rossonere can at least commend themselves for qualifying for the Champions League and winning their first match.

It’s a glimmer of hope for the future and, if the circumstances are right, then things can only get better from here.

A lead-up to the match will be posted in the next few days.