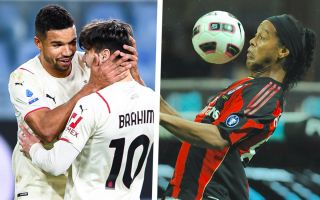 Messias matches Ronaldinho and Ibra is eternal: All the key stats from Milan’s win over Genoa

AC Milan needed to win to end their three-game streak in Serie A without a victory, and they got a vital three points last night against Genoa.

In the end it was a fairly comfortable evening against Andriy Shevchenko’s side including three goals and a clean sheet to close the gap with league-leaders Napoli to just one point. Zlatan Ibrahimovic got the scoring underway with a peach of a free-kick, while Junior Messias scored a goal in each half to round off the scoring.

➤ Milan have won a league game by three or more goals for the first time since August (4-1 v Cagliari).

➤ Milan are unbeaten in five consecutive away Serie A games (W4, D1) against Genoa for the first time since 2007. The Rossoneri have scored at least two goals in each of their last four Serie A away games against Genoa, equaling their best streak against them in the competition between 1932-1935.

➤ Prior to Junior Messias, the last Brazilian player to have scored at least two goals in a Serie A away game for Milan was Ronaldinho in 2010 (v Juventus). Messias has scored his third brace in Serie A (the first two with Crotone), but it’s his first one away from home in the competition.

➤ Franck Kessie played his 200th match with AC Milan in all competitions.

➤ Zlatan Ibrahimović has equalled Silvio Piola as the best scorer in Serie A history counting only the goals scored after turning 38 (31 goals). The Swede scored his 153rd goal in Serie A, reaching Stefano Nyers and Hernán Crespo at 26th place among the top scorers in the competition.

➤ With 73 goals, Zlatan Ibrahimović is Milan’s tenth-highest scorer in Serie A (level with Filippo Inzaghi).

➤ The mercurial striker has already scored two goals from a direct free-kick in the current Serie A season (both on the road): he had not netted any goals from this set-piece in his previous two league seasons with the Rossoneri.

➤ Ibra has scored in four consecutive Serie A away matches for the first time since January 2021 (six in that case). Zlatan has been involved in the most goals among AC Milan players in the Current Serie A season: seven (six goals, 1 assist).