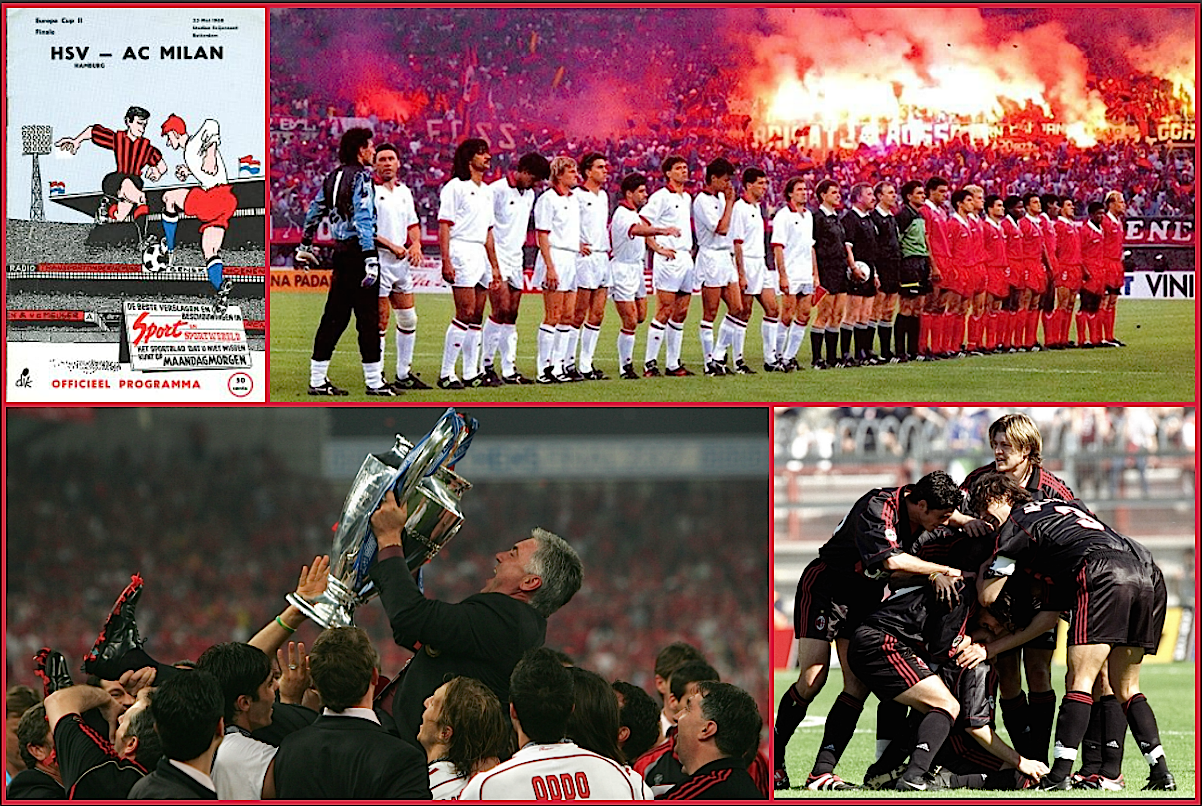 Why May 23 should be renamed ‘AC Milan Day’

Due to the nature of football and, I suppose, the nature of the Gregorian calendar, it is very rare that one date is special to a football club for a number of reasons.

There may have been a couple of memorable games that just happened to occur on a particular day, or a time where an achievement is recognised or an occasion celebrated, but I am willing to bet it is nothing like May 23 is to AC Milan.

The Rossoneri arrived at the Stadion Feijenoord in Rotterdam, Netherlands looking to add to the Serie A title they had secured just weeks previously. Having gone through Levski Sofia (6-2 agg.), Rába ETO Győr (3-3, away goals win), Standard Liege (2-0 after replay) and Bayern Munich (2-0), Milan faced Bundesliga giants Hamburger SV in the final of the European Cup Winners’ Cup.

HSV had beaten Randers, Wisla Krakow, Lyon and Cardiff City on their way to Rotterdam, but they were undone by a stellar defensive display from the likes of Angelo Anquilletti, Giovanni Trapattoni and Karl-Heinz Schnellinger, while captain Gianni Rivera dictated the play from the midfield.

In the end, two goals inside the first 20 minutes from Milan’s Swedish striker Kurt Hamrin decided the game, and won the Diavolo their first Cup Winners’ Cup.

The Praterstadion in Vienna, Austria was the scene for the 1990 European Cup final between AC Milan and Portuguese champions Benfica.

Arrigo Sacchi’s Milan side had survived a couple of scares en route to the final, including HJK Helsinki (5-0 agg.), Real Madrid (2-1 agg.), KV Mechelen (2-0 agg.) and Bayern Munich (2-2, away goals win). Their opponents meanwhile had run through three of their four opponents, beating Derry City, Honved Budapest and Dnipro by a combined aggregate score of 19-1, before winning on away goals against Marseille in the semi-finals.

The final in Austria would be decided by a single goal; a neat finish from Frank Rijkaard after a lovely interchange just 22 minutes from the end. Milan hoisted their fourth European Cup trophy aloft, and later that year they went on to win the UEFA Super Cup against Sampdoria and the Intercontinental Cup against Paraguayan side Olimpia.

AC Milan travelled to Perugia on the final day of the 1998-99 Serie A season knowing that they just needed to win to claim a 16th Scudetto title. The Rossoneri had a storming end to the season, winning their last seven games to overtake both Roman clubs into pole position.

A somewhat inexperienced side, managed by Alberto Zaccheroni, got the early goal they needed after just 11 minutes when Andrés Guglielminpietro scored with a vicious strike. Oliver Bierhoff then doubled the advantage just after the half-hour mark with a trademark  header to put one hand on the Scudetto trophy.

Then, the nerves set in. Hidetoshi Nakata pulled one back for the hosts from the penalty spot before Christian Abbiati was called upon to make an incredible save to preserve the three points and crown Milan as Campione d’Italia for the fifth time in eight seasons.

“That save I made to defend the 2-1 and go on to win the title was unbelievable,” Abbiati later revealed.

“At first, I thought I made a fine save, but then as time went by, I realised. The fans still today stop me and ask me about that save on Bucchi. I was really nervous that afternoon, and Perugia fans started throwing smoke bombs and flares onto the pitch, as they still weren’t sure to stay up and had the match postponed.

“Then it was time for a great joy and the shirt with the writing “Briciolina di pane” which I dedicated to Stefania, who at the time was still my girlfriend. But she was already expecting Giulia, our only child, who would then be born in January. For all these reasons, the Scudetto won in 1999 is part of my life and has a special place in my heart.”

The occasion will need little introduction to most Rossoneri supporters, but there was one word on the minds of Milanisti who travelled in their thousands to Athens: revenge. Having capitulated in Istanbul two years prior, Carlo Ancelotti’s Milan side met Liverpool once again in the Champions League final.

The Diavolo had to go through the third qualifying round to even enter the group stages of the 2006-07 competition, beating Red Star Belgrade 3-1 on aggregate. They then had to wait until the last game of a group stage featuring AEK Athens, Anderlecht and Lille, eventually qualifying for the knockout stages in top spot with 10 points from six games.

Celtic were the Round of 16 opponents for Milan, and the Scottish giants gave Ancelotti side a heck of a contest, with an extra time goal from Kaka at San Siro the only goal that could separate the two sides. A 4-2 aggregate win over Bayern Munich came in the quarter finals; Clarence Seedorf and Pippo Inzaghi with the goals in a memorable 2-0 second leg win at the Allianz Arena. Milan qualified for the final with a thrilling 5-3 aggregate win over Manchester United, including a 3-0 win in the second leg at San Siro in which Kaka, Seedorf and Alberto Gilardino all netted.

At the Olympic Stadium in Athens, revenge was served. Inzaghi was once again the hero of the night, netting first from an Andrea Pirlo free-kick that he knew little about, before sealing the tie by rounding Pepe Reina and slotting home to render Dirk Kuyt’s 89th minute goal a mere consolation. A seventh title in European football’s premier competition was the reward – still only Real Madrid have more at present.

Four incredible achievements for one of Europe’s most storied clubs all on the same day. What are the chances? I guess we should start calling May 23 ‘AC Milan Day’.