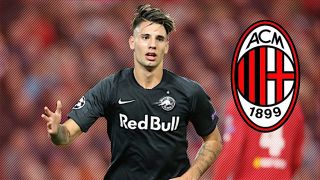 AC Milan are ‘very close’ to securing the signing of Dominik Szoboszlai from Red Bull Salzburg, according to a report.

SportMediaset are reporting that the Rossoneri have accelerated their attempts to land the Hungary international at the request of Ralf Rangnick, who will be the new manager heading into next season.

Szoboszlai has exploded at Salzburg and has been attracting interest from a number of different clubs including the likes of Paris Saint-Germain and Arsenal.

In the last few days, Milan have been in constant contact with the player’s agent Matyas Esterhazy, and the parties have moved towards an agreement.

The Austrian side are demanding €25million for their prized asset, but Milan are pushing to strike a deal around the €20million.