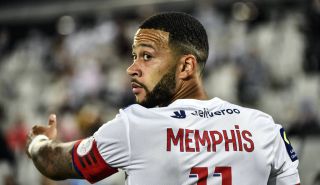 Mediaset: Depay could team up with idol Ibrahimovic as Lyon could offer him in Paqueta deal

Lyon are willing to offer forward Memphis Depay to try and land Lucas Paqueta from AC Milan, according to a report.

It was reported by Gianluca Di Marzio (via MilanNews) last night that Lyon could propose Memphis Depay to Milan in the Paquetá operation.

He added that Milan have followed him for some time, but Zlatan Ibrahimovic does not want to be on the bench, so it remains to be seen if the Rossoneri would be interested in another striker.

According to SportMediaset (via MilanLive) on Friday, Lyon have  a serious and concrete interest in landing Paqueta and are indeed willing to insert Depay into the negotiations.

The Netherlands international continues to be linked with Ronald Koeman’s Barcelona and was valued at €45m last summer but the fact his contract expires next June has brought the price down.

With his landing in Milan, Depay would achieve his dream of playing with his idol Zlatan Ibrahimovic.