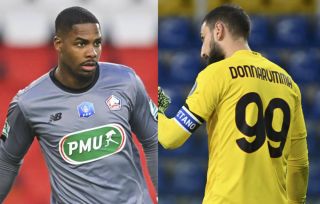 Mediaset: Donnarumma more likely to leave than stay as Milan push hard for his replacement

AC Milan are very close to getting one renewal over the line, a report claims, but they are being made to battle to keep Gianluigi Donnarumma.

Today’s edition of SportMediaset (via MilanNews) has offered some updates on the renewals of Zlatan Ibrahimovic and Gianluigi Donnarumma. The Swede will sign a contract worth €6.5m net for one season plus bonuses and his stay is now a formality, so much so that the white smoke it could arrive as early as today and a signature could follow.

The management have put €8m net per season on the plate for Donnarumma, but it is not obvious that he will say yes to the amount offered. At the moment, the 22-year-old is apparently more likely to leave the club than stay and in order not to be caught unprepared in the event of his farewell, Milan have already agreed a deal in principle for Mike Maignan of Lille.