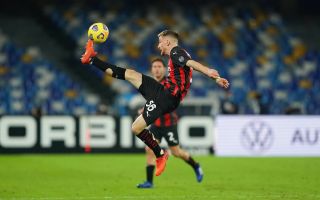 Mediaset: Extent of injury to Saelemaekers now known – Pioli’s plan to deal with the absentees

AC Milan are expected to be without winger Alexis Saelemaekers for at least the next three games as the Belgian is out with a sprained ankle.

The headline from Sunday’s game against Napoli (aside from a magnificent 3-1 win) was the fact that Zlatan Ibrahimovic will be out for the next two or three weeks with a hamstring problem.

However, Saelemaekers also limped off in the second half and left the stadium on crutches, and SportMediaset (via MilanNews) have confirmed that the former Anderlecht starlet has suffered a sprained ankle. Saelemaekers could possibly return for the trip to Sampdoria on December 6 by our calculations.

Without Ibrahimovic and Leao, Pioli will move Rebic to the role of centre-forward with Hauge wide on the left, while on the right – where the Belgian usually plays – Castillejo and Brahim Diaz will alternate.

In this emergency situation, the two youngest members of the squad could also find space, namely Lorenzo Colombo and Daniel Maldini.