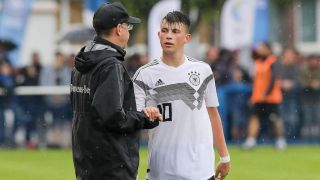 AC Milan may try to set up a swap deal with Hertha Berlin to try and land Lazar Samardzic once the window opens, a report claims.

According to SportMediaset (via MilanLive), Hertha have registered an interest in Milan full-back Ricardo Rodriguez, whose future will be away from San Siro after returning from the loan to PSV Eindhoven.

His agent Gianluca Di Domenico was Casa Milan to speak with the management earlier in the week, and it seems as though the Swiss international is attracting interest in the Bundesliga, where he starred for Wolfsburg in the past.

The report claims that Hertha Berlin seems to be the club most interested in Rodriguez, and Milan are sniffing a swap deal involving Lazar Samardzic, and 18-year-old playmaker who is currently with the German capital club but wants to leave.

Scout leader Geoffrey Moncada has followed the teenager closely and Paolo Maldini made an attempt to sign him in January, but this could be the summer of opportunity. Although, Milan would have to add money into the deal to secure Samardzic.