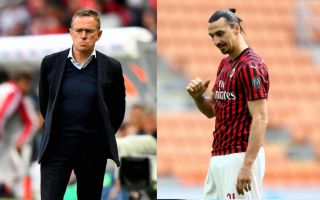 Mediaset: Ibrahimovic gives ultimatum to Milan as Rangnick finds house ahead of move

Zlatan Ibrahimovic has given a deadline to AC Milan over his future while Ralf Rangnick has begun house hunting in Italy, a report claims.

According to SportMediaset (via MilanNews), Ibrahimovic wants his future with the Rossoneri to be decided before the end of the season. A phone call would be enough, however it is not yet known when that will arrive or whether it will be before the limit the Swede has set.

There will be no more Boban to hold the talks, with Maldini and Massara waiting for clarifications on their positions. With Moncada and Almstadt, who cannot make any formal decisions at this stage, Gazidis will have the task of summoning Ibra.

The problem is that to propose the Rangnick project, the CEO must first get the green light from the German. The agreement, however, is getting closer and closer – so much so that Rangnick has already found a house in Milan.

In addition to Hammarby and Bologna, however, Fiorentina are also serious about the 38-year-old striker, especially if Chiesa should leave. For now, Zlatan continues to give priority to the Rossoneri, at least provided that Milan shows up very soon to discuss the renewal.