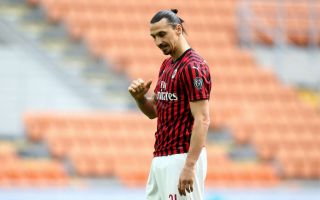 AC Milan have made an offer to Zlatan Ibrahimovic regarding a contract for the 2020-21 season, according to the latest reports.

The future of the Swede is up in the air at this point, with multiple outlets reporting that a decision regarding his future at Milan will depend on a face-to-face meeting he has with CEO Ivan Gazidis regarding plans for next season, in addition to who will be the next coach.

According to what is being reported by SportMediaset (via MilanNews), Ibrahimovic is expected in Milan at the end of this week and it is then that he will have the long-awaited meeting with CEO Ivan Gazidis regarding his future.

In January, the Swede signed a six-month contract worth €3million plus bonuses, and the report adds that the Rossoneri are ready to offer Ibra €4m for the whole of next season.

The former PSG man is asking for at least €6m and also wants to know if he will also play a leading role under Ralf Rangnick. There are therefore many unknowns, and for this reason the idea of a move to Napoli is once again gathering steam.