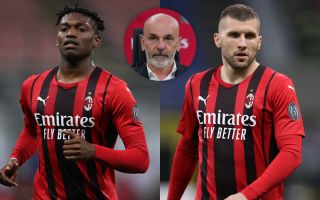 Mediaset: Leao or Rebic will start for Milan against Atalanta – Pioli yet to decide

Stefano Pioli is making his last evaluations ahead of the game between Milan and Atalanta tomorrow, as the team selection has to be spot on. There is only one doubt in the manager’s head and that concerns the attack.

The Rossoneri most likely need to come away with all three points from the game in order to secure Champions League qualification. It’s not an easy task for them, especially since Atalanta have been in very good form lately.

On the other hand, Milan are the best away side in the league and will have a point to prove after the draw against Cagliari. As reported by Mediaset (via MilanLive), Pioli hasn’t decided if Rafael Leao or Ante Rebic will start up front tomorrow.

The Croatian has done well in that position but wasn’t as impressive as Leao last time out, coming off the bench. The battle will be decided soon by the manager, but this means Brahim Diaz is indeed set to play from start once again.

READ MORE: Atalanta still have purpose against Milan as €5m is in the balance