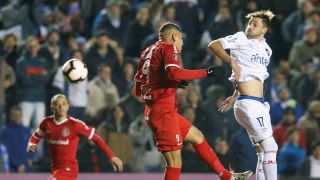 The Rossoneri are in the market to replace Ricardo Rodriguez, after it was revealed earlier on Thursday that Ricardo Rodriguez is set to complete a move to PSV Eindhoven on the basis of a €2m paid loan with option to buy set at €4m.

The latest from Gianluca Di Marzio stated that Milan have chosen Matias Vina of Montevideo side Club Nacional as their priority to succeed the Swiss international, with Vina keen on the move despite an offer from Palmeiras.

According to what Claudio Raimondi has told SportMediaset (via MilanNews.it), it is a head-to-head race between Milan and Palmeiras for the 22-year-old.

Maldini and Boban have made an offer for a paid load at €1million with an option to buy set at €6m. However, as is often the case with deals in South America, Palmeiras have made their own complex offer.

The Brazilians have raised their bid for the Uruguay international to €6m for 70% ownership rights, an increase from the previous €3.5m they were offering for 50%.