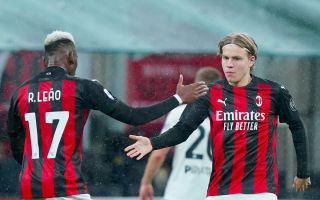 Mediaset: Milan make their stance on left wing hierarchy clear – two to stay one to leave

AC Milan have made their choice for the left wing department as Jens Petter Hauge is closing in on a move away from the club, a report claims.

Heading into the summer window there was doubt about the future of both Hauge and Rafael Leao, with the former having arrived in a deal from Bodo/Glimt last year but failing to get much playing time, while the latter has struggled for consistency during his two seasons with the Rossoneri so far.

According to the latest from SportMediaset (via MilanNews), the management have made their thoughts clear on the hierarchy for the left flank. Hauge is destined to leave the club with Eintracht Frankfurt closing in on a deal, while Leao will remain in the Rossoneri and will be available to Pioli, but will be called upon to prove it is the right decision.

Meanwhile, it goes without saying that Ante Rebic will remain with the Rossoneri too and will likely be the starter on the left of the 4-2-3-1.