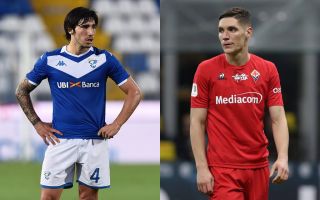 With just two games left of the season, AC Milan are making plans for the upcoming transfer window, which has been postponed until September. The first two targets of the Rossoneri have been revealed, a report claims.

According to SportMediaset, as cited by Milanlive.it, Paolo Maldini will remain in charge of the technical area and has identified a few experienced Serie A players. Of course, it will be important for him to find the right balance, along with Stefano Pioli.

The first name is Nikola Milenkovic, the Serbian centre-back who plays for Fiorentina. He has been linked with Milan in the past and it seems that the latter will make a serious attempt soon. In fact, he could be the perfect partner for Alessio Romagnoli.

Furthermore, Pioli knows him very well, having trained him at Fiorentina between 2017 and 2019. The other name is Sandro Tonali, who is liked by all of the big clubs in Italy, but Milan appear to be the most willing team to make an offer.

However, the Rossoneri will have to battle it out with Inter for the midfielder’s signature. An intriguing market derby, in other words, even if convincing president Massimo Cellino won’t be easy.