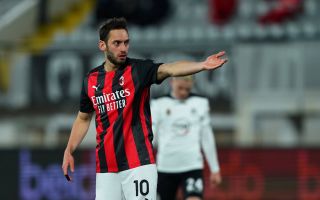 Mediaset: Milan’s latest renewal offer for Calhanoglu could be the one – the figures

Milan are keen on keeping their star players for next season, mainly focused on Gigio Donnarumma and Hakan Calhanoglu as their contracts will expire this summer. The latter is closing in on a renewal, a report claims.

According to Mediaset, as cited by MilanNews, the negotiations between Milan and Gordon Stipic have proceeded well and a renewal is now close. Calhanoglu, who has nine assists in the league this season, will nearly double his salary.

He currently earns €2.5m and the new contract would give him €4.5m per season, which is including bonuses. The No.10 initially asked for €7m per season but it seems the parties have been able to find a good compromise.

Calhanoglu has struggled a bit at the start of this year as he got COVID and had to recover from that. Against Fiorentina, he got back on target and also played very well, hinting at what’s to come in the season finale.

READ MORE: Paqueta opens up about worthwhile but tough period at Milan: “I had no friends”