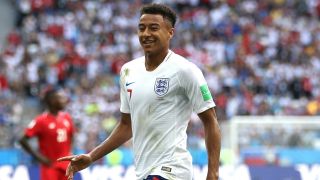 AC Milan have been offered the chance to sign Manchester United midfielder Jesse Lingard with Suso set to leave this month, a report claims.

SportMediaset.it reported earlier on Tuesday that Suso has expressed his desire to end his five-year spell with Rossoneri, but at the moment there are no big clubs on his trail.

They stated that Bundesliga side RB Leipzig are surprisingly the most concrete option at present, but they will not offer more than €20m for the out-of-form 26-year-old.

Meanwhile, the same outlet – as cited by MilanNews.it – are claiming that Mino Raiola is at work to secure Suso’s agent and in the mean time he has proposed another out-of-form player to Milan in Jesse Lingard.

The England international did not register a single goal or assist in 2019, and the report adds that his price is negotiable given that his contract with the Red Devils expires in June 2021.

The Mirror did state that United value Lingard at £40m (around €45m) amid reports he will be used as a counterpart in a bid for Leicester City midfielder James Maddison, but transfer source Louis Girardi believes a figure closer to €28million (£25m) will be enough.