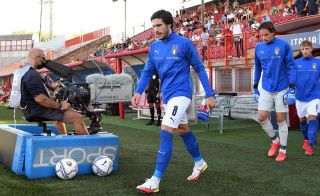 Mediaset: Tonali destined to be a star for Mancini’s Italy – when his turning point arrived

Sandro Tonali has taken AC Milan by storm this season with some confident and convincing performances, and now the Italian national team is next on his list.

SportMediaset (via MilanNews) write how Tonali has gone from ‘a shy boy to a man’ in just a few months. The former Brescia star has grown up having disappointed in relation to the expectations of last season, having totally transformed himself into a midfielder with personality who looks to put his stamp on the game.

In 7 league games he has scored 2 goals, becoming a key pillar for Milan and for Stefano Pioli. The turning point in Tonali’s maturity came in the summer with his permanent arrival from Brescia.

The 21-year-old has reduced his salary by €400,000 per season in order to stay with the Rossoneri – a gesture that the club and the fans appreciated. He is currently the captain of the U21 team, but there is no doubt he is destined for an important role also with Roberto Mancini’s Italy.