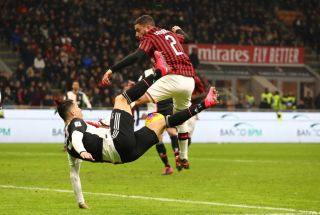 Mediaset: Why Valeri may have gotten penalty call on Calabria right as per laws of the game

Referee Paolo Valeri may have gotten the decision to award a penalty to Juventus on Thursday night correct, a per a report.

Ante Rebic gave the Rossoneri the lead in the 1-1 draw with a precise volley, but Hernandez was then sent off for a second yellow card and – after VAR consultation – referee Paolo Valeri gave Juventus a late penalty after he adjudged that Davide Calabria blocked a Cristiano Ronaldo shot with his arm.

Sportmediaset are reporting that it was been right to award Juventus a penalty, referring to a similar incident involving Cerri in Brescia-Cagliari earlier this season.

In that case, the designator Nicola Rizzoli admitted that it was wrong to blow the penalty as Cerri had jumped without being able to see what was happening behind him. The ball hit the arm, stretched out as a regular dynamic in the jump – therefore 100% involuntary contact.

However, the report claims that during the Ronaldo-Calabria incident, the Milan defender ‘enlarged’ his body volume, as evidenced by the raised leg on the turn of CR7.

The arm of Calabria thus becomes a real obstacle, almost voluntary even if the primary intent of the No.2 of the Rossoneri was to oppose Ronaldo’s shot with his leg.

It was for this reason Valeri and Nasca decided on a penalty, but good luck explaining that to the rest of the Milan fans.