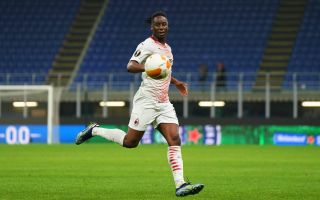 AC Milan midfielder Soualiho Meite is happy that the team emerged from a real battle with Red Star in the Europa League Round of 32.

Having scored twice in Belgrade last week, the Rossoneri knew that they simply had to avoid defeat or a high-scoring draw against the Serbian league leaders in order to progress, and they battled to do that drawing 1-1 on the night.

It looked like it would be a much more comfortable evening when Franck Kessie made it 1-0 with a penalty in the 9th minute, but the visitors equalised and had plenty of chances to get their noses in front in the tie, but ultimately both sides were wasteful in the final third and the Rossoneri progressed.

Meite was interviewed by Milan TV at the end of the game, and he began by reflecting on the game, with his comments transcribed by MilanNews.

“A tough match against a good team. We went through but we know we didn’t have a good match. We are happy with qualification but we know we need to do more,” he said.

“We played a lot of games, it’s not easy to play every three days. There is a little tiredness. We have a good group, we must have the right mentality to go forward.”

Since arriving in January, Meite has played multiple times alongside Franck Kessie in the midfield, and he confirmed that he has a good feeling with him on the field.

“He is French like me, communication is easier. We help each other a lot and we talk to help the team.”