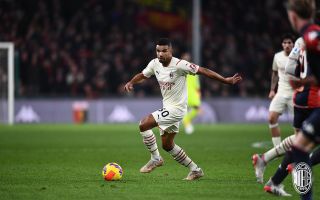 AC Milan boss Stefano Pioli gave a first start of the season to Junior Messias and the winger certainly did not disappoint, scoring a brace against Genoa last night.

As La Gazzetta dello Sport (via MilanNews) writes this morning, Messias is at Milan for the qualities that he offers and not just because of the incredible journey he has been on since arriving in Italy. He is very much an asset to the team and to the attacking department, giving versatility and something different to the other forwards who play centrally or to the right.

The double he scored at the Ferraris are the sign of a clinical nature in front of goal that Milan have got used to having from Ante Rebic. The first goal was pure instinct and awareness to head over the keeper who was off his line, while the second was a very measured first time finish into the far corner, showing he will not waste chances presented.

Messias has struggled to get to where he is now, but this is a closed chapter and he feels he still has a long way to go. The 30-year-old Brazilian is showing that he has the right personality to succeed at Milan while Maldini and his colleagues are feeling smug about their deadline day purchase.

READ MORE: Pioli gets the answer he wanted as Milan end mini-crisis with comfortable win