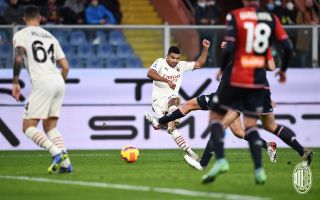 Messias believes he ‘deserves’ to be at Milan and insists: “The time has passed to talk about fairy tales”

Junior Messias has insisted that he wants to put all talk of his incredible journey to one side in order to focus on just doing the best he can for AC Milan.

Stefano Pioli gave a first start of the season to Messias and the winger certainly did not disappoint, scoring a brace against Genoa last night with a goal either side of half-time. That comes after he netted the winner in the win over Atletico Madrid last week, as the Brazilian seems to have finally hit the ground running after injury problems.

Messias spoke to Sky Italia after the game against Genoa and while he admitted that he feels like he deserves to be at Milan, he is no longer thinking about his journey to get there. His comments were relayed by MilanNews.

“I always work for the team and I try to give my best wherever the coach puts me, both as an attacking midfielder and as a winger.”

On the effect of facing Shevchenko and playing with Ibrahimovic: “It is impressive to see certain players but when you get to this level you have to get used to it. Ibrahimovic, Maldini and Dida are at Milan and it’s nice to have them close.”

On the differences between the amateur level and Serie A: “You have to adapt to the lower categories or to the big teams, both to players who are a little less good and to better ones. In Milan, maybe you get the ball less, it depends.”

Messias was even asked there is a chance to see him play for the Italian national team one day given how long he has been playing in the country and Roberto Mancini’s tendency to reward players for Serie A form.

“I can’t play for the national team because I don’t have an Italian passport,” he responded bluntly.

Messias arrived back on deadline day in the summer transfer window and he has confessed that the timing of his move made preparing for the new season at his new club quite difficult.

“I lived it quietly, I let my agent work. Not going for the training camp with the team is not easy and brings a bit of stress that may have led to the injury. Each player has his own story.”

READ MORE: Ibrahimovic back to his unflappable self after Genoa win: “Just sign Ibra and I’ll bring you magic”