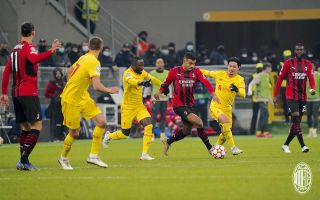 Messias believes in Scudetto dream and insists Milan ‘must always win’: “We have to raise our heads”

Junior Messias has insisted that he and his AC Milan team-mates believe in their chances of winning the Scudetto, despite the ‘strong’ competition they have.

Messias spoke on the eve of Milan’s trip to face Udinese at the Dacia Arena, which comes a few days after the Rossoneri’s Champions League exit at the hands of Liverpool. Milan finished bottom of Group B which means they can now simply focus on domestic competitions, and the Brazilian confirmed that the focus has instantly switched to the league.

“We were sad, we wanted to go on. But now we have to raise our heads and think about the championship,” he said (via MilanNews).

“The performances were of a high level, we have to face strong teams used to those games, but we have always played for it. We must be aware of what we have done.

“We are first, so we have to believe in it. Milan are a team that must always win. We believe in it, we will do everything, but there are also other strong teams in the running. We have to think about one match at a time, the season is long. We must try to score as many points as possible.”

Three years ago, Messias was playing fourth division football having been an amateur just before that, working as a delivery man on the weekends in order to earn enough money to get by. He spoke about who his idols were growing up and why he feels like he is now worthy of playing in Serie A.

“My idol as a child has always been Ronaldo Il Fenomeno, for me he was football. I want to show that I can play in Serie A. A player doesn’t evaluate himself after only two games, you have to wait for the whole season. I’m trying to improve, I’m not 100% yet, I haven’t shown what I know yet. to do. I’m trying to find the best form as soon as possible.”

There has been some debate about whether Messias should play as an attacking midfielder or whether playing on the right suits him more.

“I always try to do the best for the team, where the coach needs me to play,” he said.

On the many Brazilian players in the history of Milan, he added: “There are fewer South Americans now. I always try to give my best.”