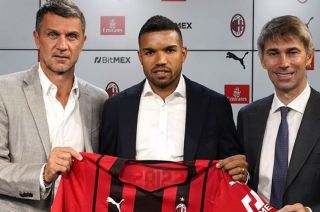 AC Milan winger Junior Messias has revealed that he felt more fear when playing in the fourth tier in Italy compared to making his Champions League debut.

Three years ago, Messias was playing fourth division football having been an amateur just before that, working as a delivery man on the weekends in order to earn enough money to get by. Crotone took a chance on him and he had a fantastic first season in the top flight last season, which persuaded Milan to take a chance on him.

The 30-year-old joined on deadline day from Crotone and took some time to get up to speed. Then his fairytale moment arrived, as at the Wanda Metropolitano his story opened its most interesting chapter: he was a Champions League match-winner for Milan.

Messias spoke about his career so far and his exploits with the Rossoneri in a long interview with Carlo Pellegatti for StarCasinò Sport, and MilanNews relayed all of his comments.

Speaking of goals in Madrid, did you have time to think about your career as you were about to enter the history of Milan? How did you live those 3-4 seconds?

“It was wonderful. The ball was soft, I only had the goalkeeper in front, I said to myself: ‘Here I score a goal’. It was a beautiful moment. I got to think about it (laughs) because the ball arrived really soft, I had the time to jump in the right way and score goals. It was exciting.”

It is an emotional starting point for your career: “Yes, it was beautiful.”

During celebrations you pointed to heaven, what does it mean for you?

“Sometimes people find it hard to believe but an aunt of mine many ago made a prayer for me, I was still in Brazil and there was not even the thought of coming to Italy, and she told me that I would play in a big club in Europe.”

What made you change your mind?

“It’s because I didn’t have the documents yet, then two days after I got them Ezio Rossi called me. He didn’t even know, but the two things fit together. I took that path there and I said to myself: ‘Since I am there, I will go ahead’. I didn’t think I’d get to where I am today.”

What is your Brazilian idol?

“Ronaldo the Phenomenon. I liked everything about him. After he stopped I didn’t watch the national team games as often as before. When he was playing in Brazil and there was the match I stopped, whatever I was doing, and watched him play.”

“I haven’t had the chance yet, but I would certainly like to talk to him someday.”

What did football in Casale, Chieri and Gozzano teach you when compared to these levels?

“To have peace of mind. I’ll tell you the truth, I was more afraid of playing in Excellence or in Serie D. I had that thrill, that pressure, more then than now that I play a Champions League match against stronger opponents.”

“Because now I feel safer, more mature. I feel calmer.”

What have these years of professionalism taught you and what do you need to improve in your opinion?

“They taught me that I always have to work hard, I have to train hard and understand that what I did yesterday is not enough for tomorrow. You must always work, you must always try to do your best.”

Last year only Rodrigo De Paul managed to dribble more than you. Is it an innate talent you’ve always had or have you cultivated it?

“I’ve always had it, it’s a natural thing that I’ve had since I was a child.”

What were Milan for you before and what is Milan for now?

“Milan is a team that I have always admired. From an early age I fell in love with him watching him play. Now I’m here, I’m proud to be here. Arriving at a club like this is for a few “.

How did you experience the hours before your move to Milan?

“I was a little tense. Getting here at the last was a wonderful thing, the news reached me at two in the morning. I hadn’t slept yet and couldn’t sleep. Then the next day, slowly, I found myself in reality.”

You fought to get here. In your opinion, can you teach something on a human level to these great professionals and players here at Milan? Could you be an example in anything?

“I don’t know, maybe a life example. I tell you the truth, football is a different world from the real one out there. There are suffering people there, who get up at 5 in the morning and return home at 8 in the evening. Some may not have experienced this.

“Life outside of football is not easy. Maybe as a child you start playing and football gives you the possibility of having a better life, a life we ​​say luxurious that many don’t have. Understanding what the others are, who live in that world parallel to this.”

What did Giovannino Stroppa [former coach], the great Rossonero, give you, and do you still feel it?

“Yes, I feel it. The coach has become a friend, he has given me so much. When I arrived there in Crotone he with his way of doing and coaching made me really grow.”

What did Stefano Pioli give you instead? Do you remember the first thing he said to you?

“There was a period of difficulty due to injuries. Maybe in training it wasn’t going well, but Mr. Pioli came to me and said: ‘Look, you’re strong, don’t worry’. It gave me an extra boost.”

How is it to play with Ibrahimovic?

“Ibra is great. When I’m in trouble on the pitch I give the ball to him, he never loses it (laughs). I always trust him.”

What’s your next target?

How much do you miss Simon Kjaer?

“Simon is very strong and very good, we hope he recovers as soon as possible. On the human level? I had little time to get to know the guys, then I have been out for a long time and since I arrived I have only been training with them for three weeks. I haven’t had time to get to know them as people yet, but slowly…”

What struck you about the Milan locker room?

“They are good guys, they are professional guys focused on work.”

“I know Milan little, I have always lived in Turin. Milan is a big city, I like that there is always a lot of movement.”

How do you spend your free time?

“I always try to be with my family. When I have time I always want to be with them, I want to disconnect from everything.”