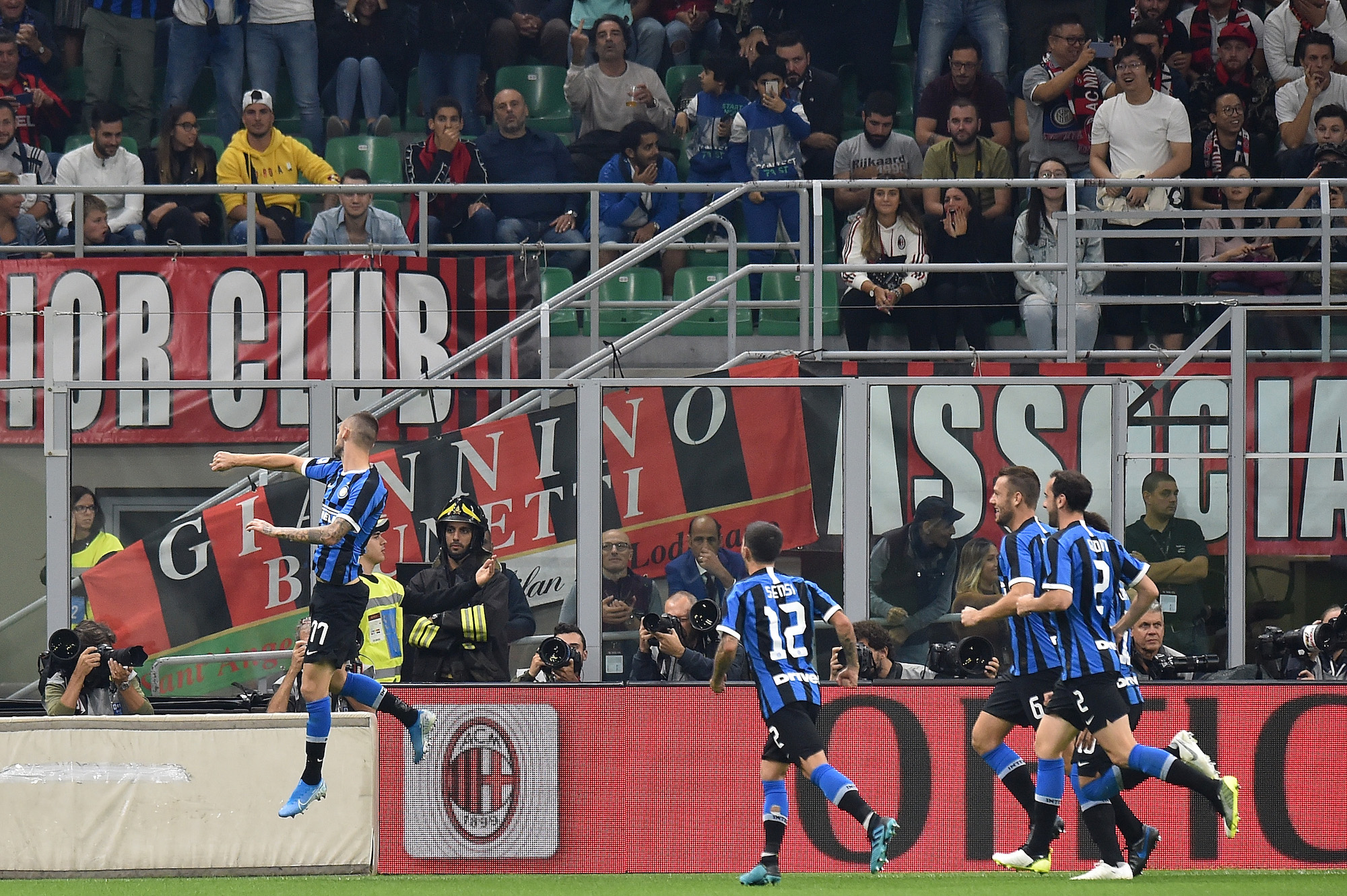 AC Milan once again fell short in the Derby della Madonnina, losing 2-0 to Inter at San Siro on Saturday night.

It took until the second half for the first goal to be scored after two had been ruled out by the Video Assistant Referee in the first half, and VAR had a part to play in the opener.

Marcelo Brozovic’s deflected shot had initially been ruled out for offside but was overturned, and Romelu Lukaku added the killer blow 13 minutes from time.

The result means the Nerazzurri move six points ahead of Milan, who have now lost two of their first four games.

After a slow start to the game in which Inter dominated possession, Milan nearly shot themselves in the foot with a backpass that Lautaro Martinez almost intercepted. However, he and Gianluigi Donnarumma met the ball at the same time and it went out for a corner.

The Nerazzurri continued to press high up the pitch and force Milan to give the ball away, and Romelu Lukaku came close to opening the scoring in the 19th minute when he was put through on goal.

The Belgian delayed his strike and Donnarumma was equal to it with an impressive low save, but the warning signs were there for Giampaolo’s side.

Inter continued to pile on the pressure and came inches away from scoring twice; the first through a close range shot from Lautaro which was harder to miss than score, the second through a strike from Danilo D’Ambrosio which struck the woodwork.

At the other end Milan did have the ball in the back of the net through Hakan Calhanoglu, but the Poland international had to cut short his celebrations as the whistle had already gone.

It was Inter’s turn to have a goal disallowed ten minutes before the break when an acrobatic effort from D’Ambrosio was turned into the path of Martinez, who fired home but it was quickly  and correctly ruled out for offside.

Milan had a huge chance to take the lead not long after as they countered quickly from a corner; Suso wrestling the ball from his man and carrying it almost the full length of the pitch, but his shot was heroically blocked by Kwadwo Asamoah inside the area.

Rafael Leao – starting his first game of the season for his new club – proved to be the source of creativity down the right side, and Piatek should have at least tested Samir Handanovic when the Portugal U21 international found him unmarked at the back post. However, he looped his header over. 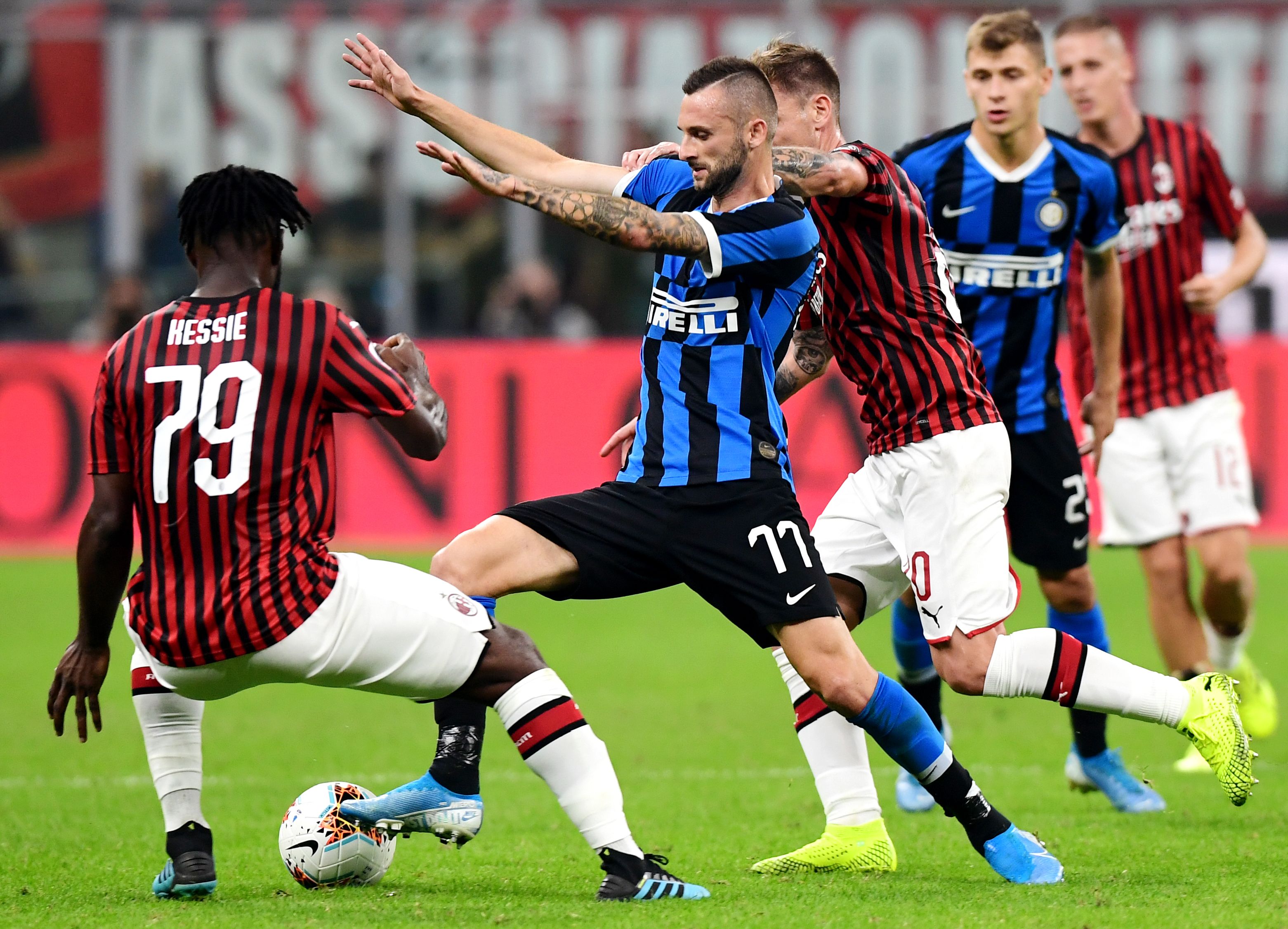 Inter took the lead less than five minutes into the second half in bizarre circumstances. A free kick was taken short to Marcelo Brozovic, whose shot took a freak deflection and trickled in at the far post, but the flag went up for offside.

Upon replay from VAR, it was deemed that no Inter player was in an offside position when the ball was struck, and as a result the call was overturned and the goal was given.

Antonio Conte’s side had an opportunity to double their lead on the hour mark as Milan fell asleep again. A ball was allowed to roll to Lautaro inside the box, and his effort was parried up in the air by Donnarumma, but Lukaku couldn’t head the rebound on target.

However, the former Manchester United man was on target to seal the three points for Inter with 13 minutes to go. Nicolo Barella was completely unmarked and crossed perfectly for Lukaku, whose glancing header just crept in at the near post.

Not long after, substitute Matteo Politano hit the crossbar as the Milan defenders appeared to completely give up.

Inter continued to counter and almost had a third when Antonio Candreva was given a free run into the box, though his shot cannoned off the inside of the post and across the goal line before being cleared.

The introductions of Lucas Paqueta, Theo Hernandez and Ante Rebic throughout the second half could not change the scoreline as Milan slipped to yet another derby day defeat.