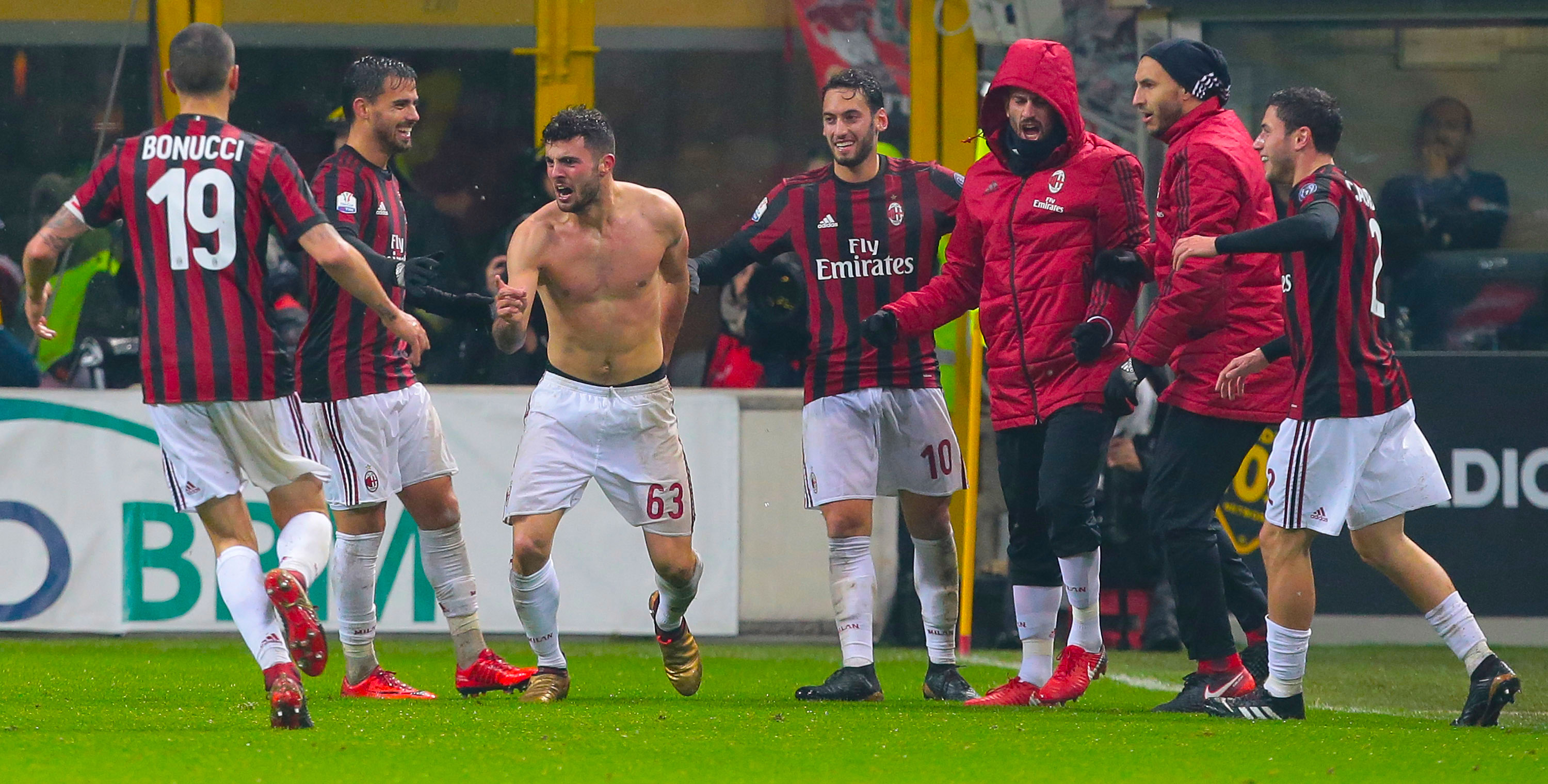 AC Milan qualified for the semi-finals of the Coppa Italia with a 1-0 extra-time win over city rivals Inter.

Patrick Cutrone struck in the first period of the additional 30 minutes with a sweeping half-volley past an otherwise resilient Samir Handanovic.

The win sets up a two-legged meeting with Lazio in the final four of the competition, and makes it three defeats in a row for the Nerazzurri in all competitions.

The ‘home’ side for the fixture had the first opportunity of the game as Suso was brought down 25 yards out, but the Spaniard failed to beat the wall with a trademark free-kick.

There was a half shout for a penalty in the 16th minute as Manuel Locatelli went down, but he was instead booked for simulation, with replays suggesting it was the right decision.

After a good period of pressure that saw Giacomo Bonaventura with a header that was tipped over, Inter thought they had taken the lead in familiar fashion. A header was glanced to the far post where Perisic was on hand to finish off Antonio Donnarumma, but VAR ruled the goal out as Andrea Ranocchia was stood in an offside position.

Milan pressed for the opener and nearly found it two minutes before the half hour mark; Kessie finding Suso in space but Samir Handanovic produced a good low save.

There were penalty shouts early in the second half from the Rossoneri as Nikola Kalinic went down under a shove from Joao Cancelo, but the referee told the Croatia international in no uncertain terms to get back to his feet.

Twelve minutes after the break Milan had a chance as a low cross found its way to Bonaventura inside the box; the former Atalanta man spinning and firing an effort over from around 18 yards.

Moments late, Joao Mario should have given the Nerazzurri the lead when Icardi found him with a knock-down, but the Portuguese was superbly denied by a reaction save from Antonio Donnarumma.

It really should have been 1-0 to Milan in the 65th minute as a fluffed saved from Handanovic fell into the path of Bonaventura, but he could only head over with the goal gaping.

With just over ten minutes to go, Gattuso’s side were unlucky not to make it 1-0 as a curling shot from Suso was deflected onto the crossbar.

After a tense ending to normal time and an equally nervy beginning to extra-time, Milan finally broke the deadlock late in the first period of the additional 30 minutes.

A sweeping ball in behind the Inter defence fell to Cutrone, who fired in on the half-volley, with replays showing that Milan Skriniar played him onside.

The Rossoneri pushed for the killer goal on the counter-attack in the second half of extra time and almost got it with four minutes remaining, but Suso’s low cross flashed across the face of goal with Cutrone a yard behind it.