AC Milan and Inter played out a 1-1 draw at San Siro on Sunday night in what was a fiercely contested Derby della Madonnina with both goals coming in the first half.

It was certainly a game where the Nerazzurri needed the three points more than their city rivals as there was a seven-point cushion before the match which ended up being maintained, but the Rossoneri did miss the chance to go top of the table outright after Napoli dropped points against Hellas Verona.

Hakan Calhanoglu opened the scoring against his former club with a well-taken penalty after he was fouled by Franck Kessie to earn the spot kick, an own-goal from Stefan de Vrij ensured a quick response from Milan while Lautaro Martinez took a second penalty but Ciprian Tatarusanu saved well to keep the score 1-1, which is how the game finished.

Below is a tactical analysis of the game, and as a side note another dissection of the game will follow which contrasts the approach in this season’s match to the 3-0 defeat last season, so this will serve as more of an overview of the key events.

There isn’t too much to analyse about how the first penalty occurred apart from that it was a terrible lapse in judgement from Franck Kessie. We wish we could transport ourselves inside the mind of the Ivorian to understand why he snubbed the two easy passing options or even a simple clearance downfield and instead chose to turn towards his own box.

The penalty itself has been debated at length in the newspaper columns and by fans on social media as to whether Calhanoglu catches Kessie first or vice versa, but all we can do is question how he went from the position above to the position below. Perhaps his head is clouded by uncertainty about his future and it is affecting his decision making, who knows… 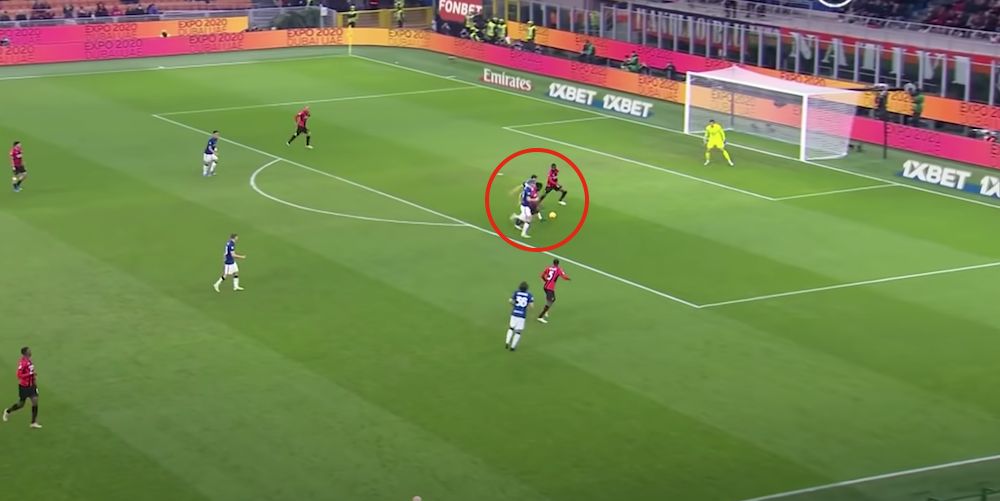 The best way to sum up the frantic nature of the first 20 minutes or so would be to say that it was a lot of failed transitions from both sides, who were each looking to win the ball back high up and move it vertically to areas where they had players in isolation.

In the sequence below the ball carrier is not short of options even if Kjaer is doing a good job of blocking Lautaro’s attempted dart and a makeshift back three has set in with Tomori as a sweeper to prevent the counter.

However this is where the sloppiness comes in, as Krunic is allowed to come from being circled on the left above to winning the ball back, which springs a counter-attack the other way.

Inter do a good job of transitioning into a compact back five, clearly well aware of Milan’s intention to overpower them down the middle. Though the Rossoneri lined up in a 4-2-3-1 on paper with Leao on the left and Brahim on the right, it functioned more as a 4-3-2-1 or a 4-2-2-2 at times without lots of actual width.

The conclusion to the passage below was that Leao shot straight into Handanovic’s arms from 25 yards, with that being the only option.

Prior to Sunday’s derby, only 12% of Inter’s attacks had gone down the right side in the previous 11 league games of the Serie A campaign. What Simone Inzaghi did in this match though was quite clearly target Milan’s left-back Fode Ballo-Toure in Theo Hernandez’s absence and the lack of defensive help he was getting.

As Lautaro drops in to quarterback the attack, it can be seen instantly that a big space has been left for a dangerous ball to be played into with the Senegal international not getting the memo about playing a high line, clearly stood behind his fellow defenders and putting himself in isolation. 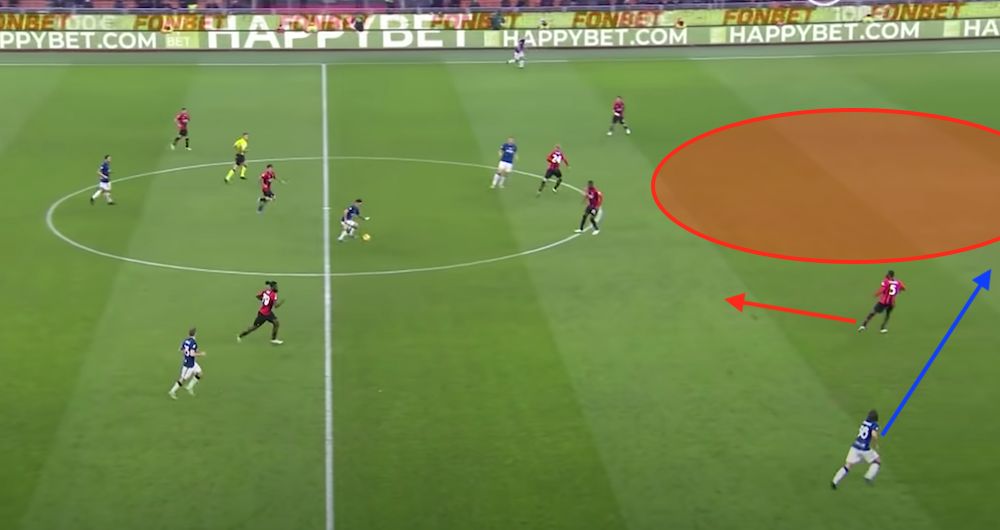 Kessie was asked to pin Barella for most of the game and that meant he had to stick to his assignment. Lautaro simply put an inviting ball in behind Ballo-Toure, far from a masterful one but enough for him to get his pursuit angle all wrong.

At first he goes with Darmian presuming he will follow the light blue path, but he chops back inside which exposed Ballo-Toure.

The end result is an almost inexplicable situation from first frame to last (like the Kessie penalty), yet it comes through a clear plan from Inter and it was not the first time the ex-Manchester United man would get the better of the €4m summer signing from Monaco, nor would it be the last. A penalty was conceded, that was thankfully saved. 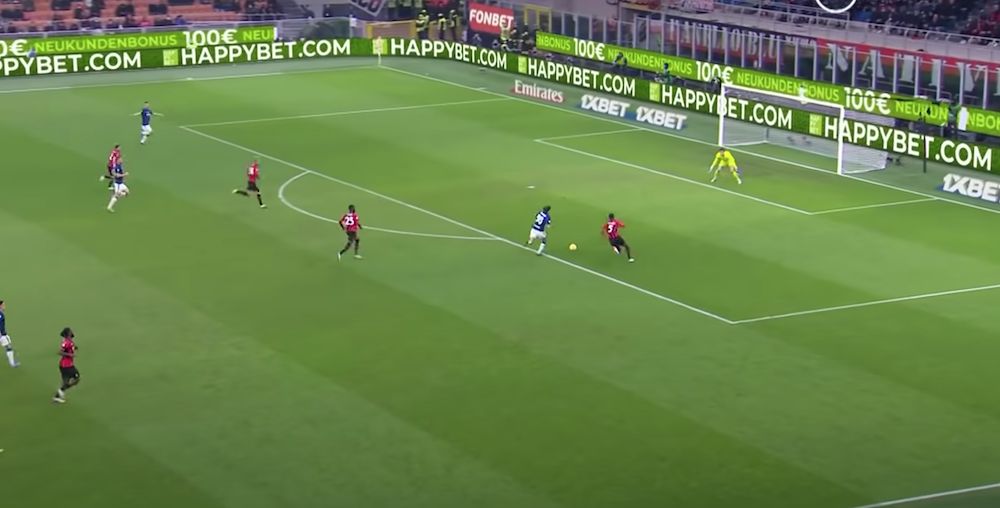 Getting away with it

The chance below was another damning indication of how Milan were far from their usual selves at the back in a sub-par first half. Kjaer gets beaten to the byline by Bastoni of all people – the marauding centre-back – and the lack of attention is almost fatally exposed.

The line of three players (Tomori, Kessie and Ballo-Toure) are clearly expecting a ball to the edge of the six-yard box but in doing so are actually ball watching, as Kessie has lost Barella and Ballo-Toure has lost Darmian, the two men they were asked to mark.

They have around 12 yards of space and as Barella gathers the ball to shoot, Ballo-Toure makes a block on the line but the Italian had half of the net to aim at and really should have done better, even with another touch. A huge let-off.

From terrible to worse

Remove Fode Ballo-Toure at half-time became the only option as the minutes ticked by. In the chance below, he again loses out in a duel with Darmian as the wing-back beats him in the air to knock the ball down towards the penalty spot. 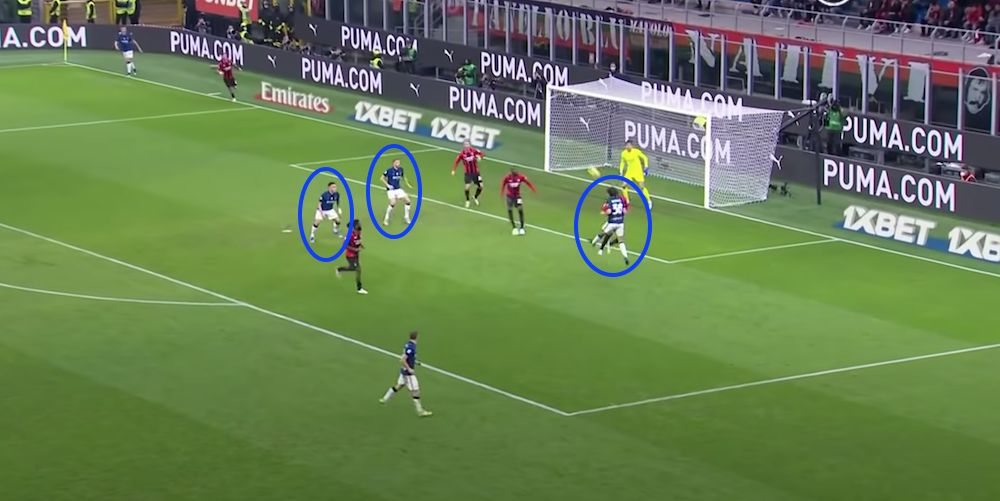 The Nerazzurri No.9 Edin Dzeko shields the ball well before rolling it to Lautaro Martinez, who somehow rolled his effort wide of the left post with Tatarusanu rooted. It was another demonstration of how Milan were being overpowered down their left and that the defensive department were always two steps behind the play, especially second balls. 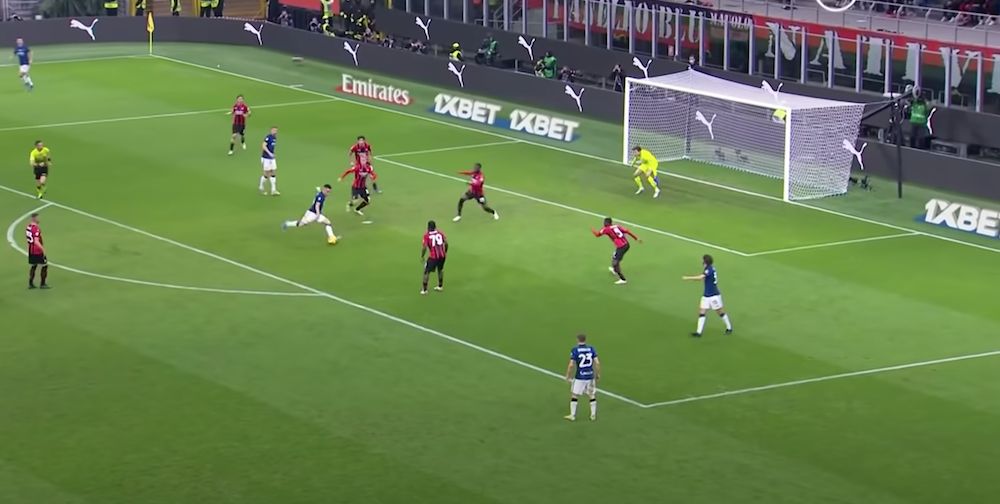 This might be unpopular given how his performance was rated by some pundits and newspapers, but this was far from Kjaer’s best game as it was his confusion – along with Ballo-Toure’s – that had Tomori virtually playing three positions on his own at times.

In the sequence below he is bumped off the ball fairly by Dzeko after a half-hearted attempt to clear the danger and the moment of disorganisation allows an easy pass to be rolled towards Vidal who has been left all alone advancing towards the penalty spot.

Thankfully, substitute Pierre Kalulu was on hand to make two heroic blocks and deny the Chile international, though it was yet another big chance that did not reflect well on what is normally a much more disciplined back six players.

Milan got themselves on top in the final 15 minutes and Handanovic’s palms were probably still stinging by the time Alexis Saelemaekers fired a 90th minute warning shot from 20+ yards that rattled the inside of the post.

The interesting thing to note is again how the Belgian – not for the first time this season – caused havoc by drifting inside and looked the most likely to create. Could he have slid it to Kessie on his right? Potentially, but based on his attempt from the rebound he might not have scored either.

As alluded to above, there was a clear man-marking assignment from Milan that worked to varying degrees. On the whole, Krunic was asked to do more on the defensive end than actually in possession as he was asked to press Brozovic, who had a field day last season as the deep-lying playmaker.

Kessie was asked to try and pocket Barella and bar that one chance he should have buried, the Ivorian did his job. The centre-back pairing seemed to match up as Kjaer-Dzeko and Tomori-Lautaro, but the clever movements of the latter certainly complicated things.

There was a double purpose between Pioli playing Brahim as a right winger. In addition to offering a dribbling outlet and playing more as an inside forward, he also pinned the dangerous Perisic back. Inzaghi broke this and had Brahim overloaded by allowing Bastoni to overlap, as seen in Barella’s miss above.

Finally the intensity of the subs off the bench allowed Milan to have that proverbial surge of fresh legs and almost tipped the pitch towards the Curva Sud in the final 10-15 minutes. Inter’s subs did not have the same effect.

Looking at the athletic data that the Serie A match pack provides, we can initially see that the average position map for the first half paints the picture described above. Milan’s left flank was isolated compared to the cluster of midfielders and with Leao pushing the furthest up, it left Ballo-Toure alone and in danger. Inter, meanwhile, had Darmian and Barella quite high on their right side. 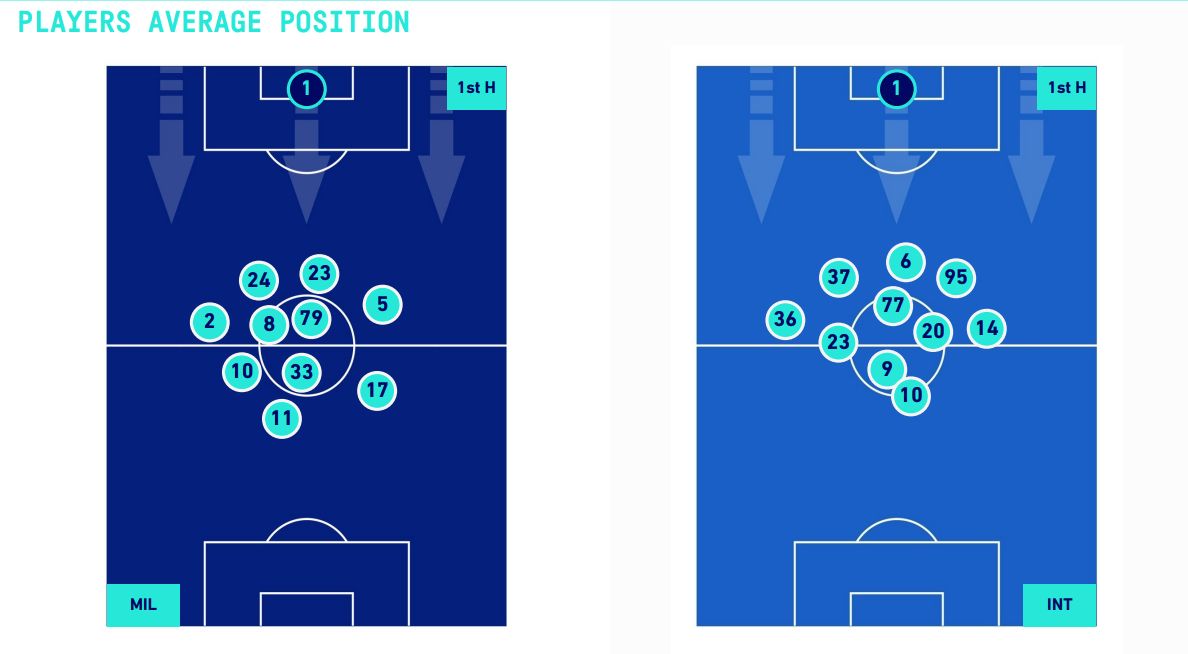 We mentioned above how Inter have typically avoided attacking down their right wing this season so far, but their number virtually doubled from 12% in games 1-11 to 23% in Sunday’s game. Milan, meanwhile, went back to a more predictable attacking pattern with 85% of attacks going down the left or the middle. With Theo there to consolidate said attacks, the same effect as usual was not achieved.

Looking at the touch map, it is worth noting that Milan had 155 total touches of the ball in Inter’s third, while Inter had 152. However, only Zlatan Ibrahimovic out of the starting forward cracks the top three in attacking touches with 14, while substitute Ante Rebic gets in with four. Lautaro and Dzeko were more balanced in this regard. 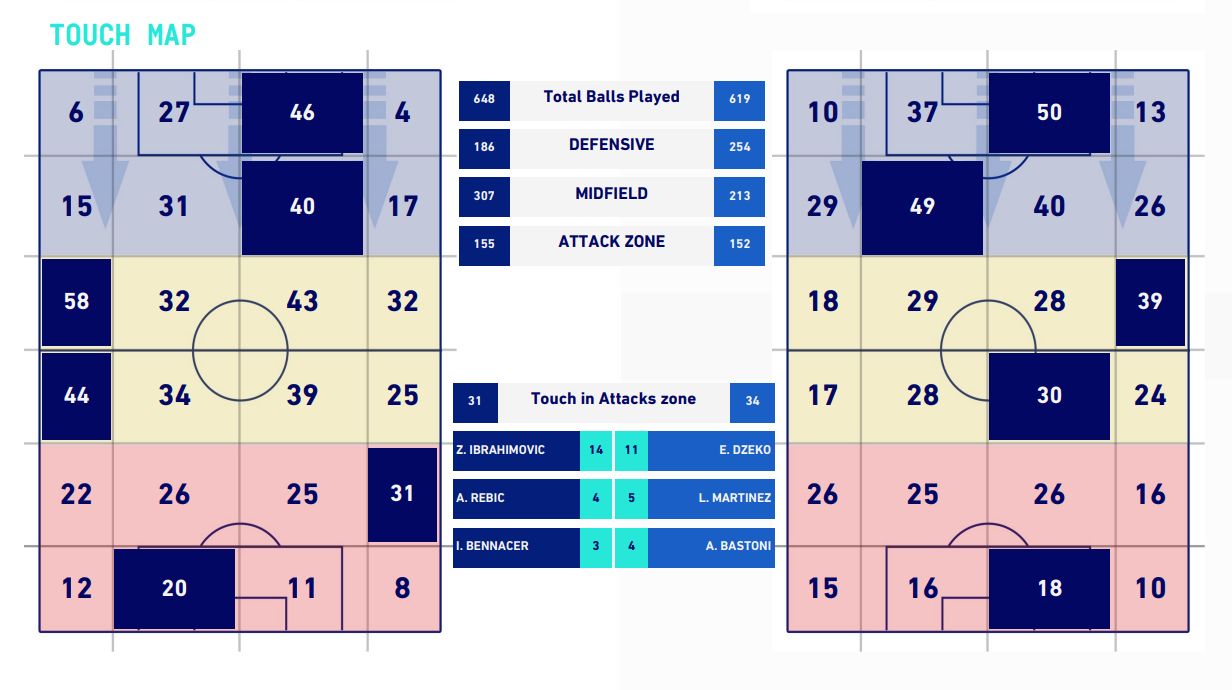 Finally, the athletic performance data highlights that Sandro Tonali was the intense and battling presence that the eye test suggested as he had the highest average overall speed and highest sprint speed. It also shows how hard Inter’s midfield three worked. 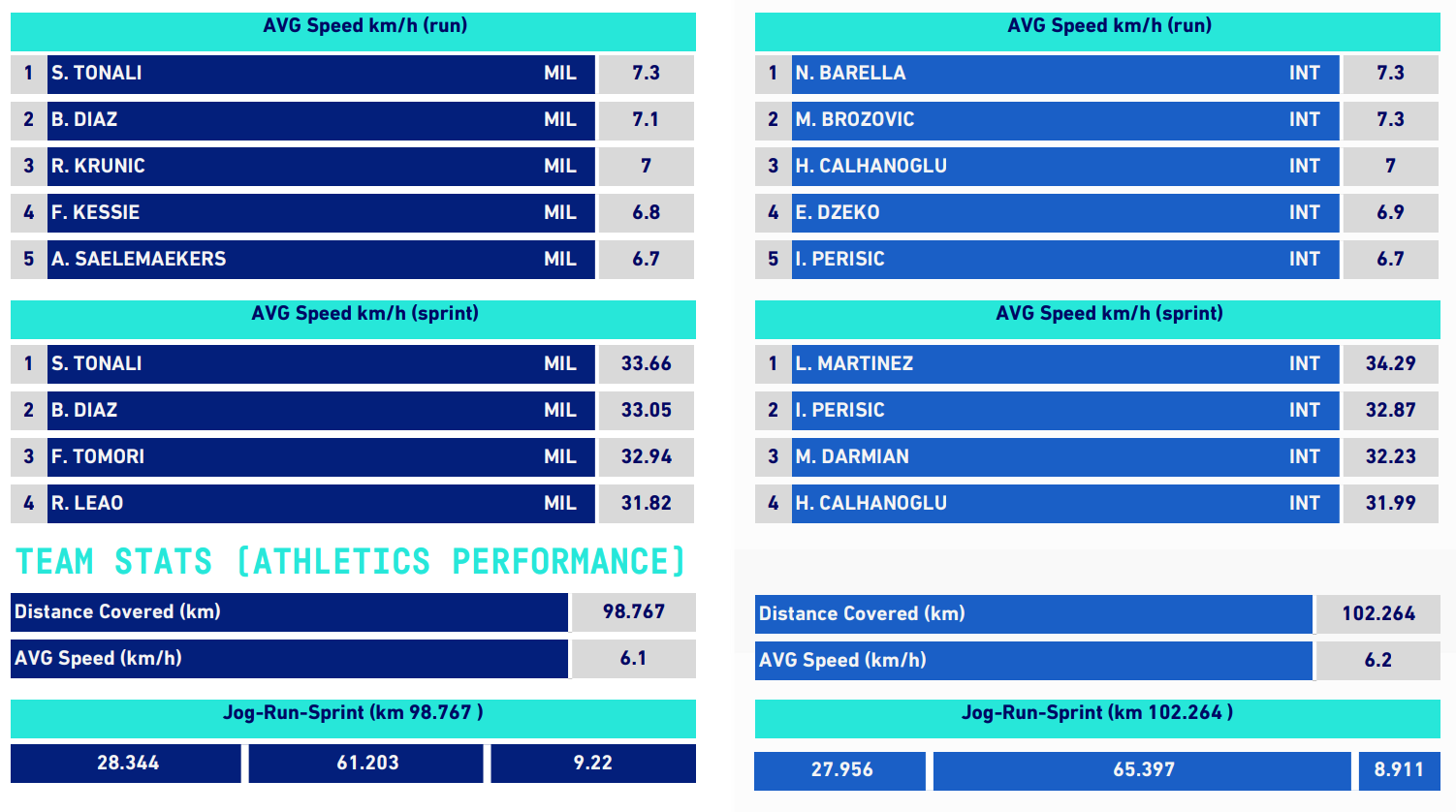 For a 1-1 draw, it was quite an entertaining spectacle from two teams who would probably love to rewind and replay certain key incidents again.

Had that second penalty gone in it could have unlocked the game even further, and while Milan were far from their best they managed the game in such a way that they had more energy in reserve for the final 15 minutes and looked like the only team who were going to win it.

The next meeting in the new year should be equally fascinating, if not more.

READ MORE: Milan optimistic about securing renewal of trio with fundamental importance to the project