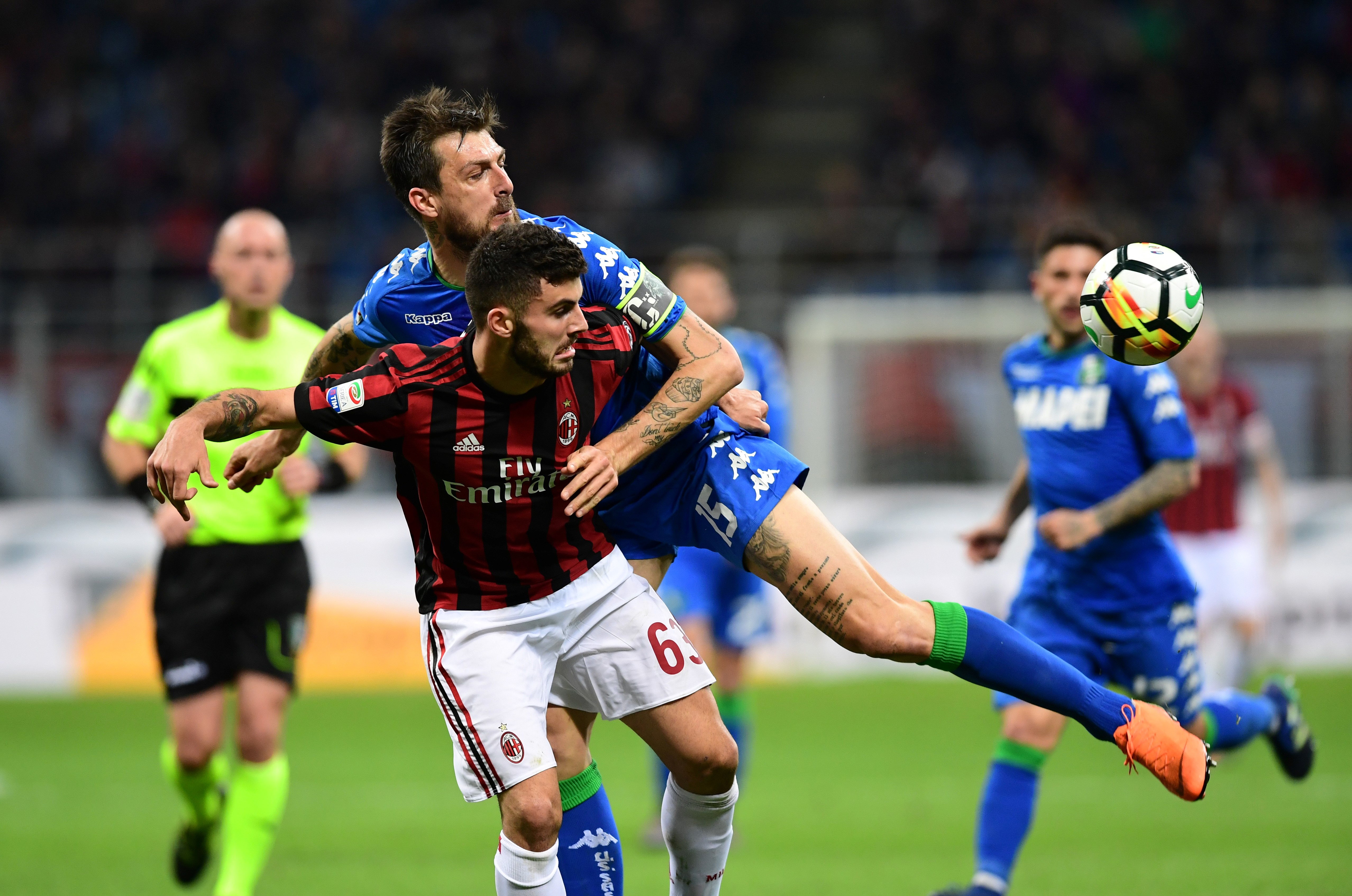 AC Milan were left frustrated at San Siro on Sunday evening as they were held to a 1-1 draw by struggling Sassuolo.

Matteo Politano got the opener for the away side in the second-half, but Nikola Kalinic equalised inside the final ten minutes.

The result means Milan stay eight points away from the Champions League places despite defeats for Roma and Inter.

Milan took the front foot immediately and had a chance inside the opening 60 seconds as Franck Kessie was on the end of a Ricardo Rodriguez cross, but he couldn’t finish despite being only a couple of yards out.

In the fourth minute Alessio Romagnoli came off with a physical problem, replaced by Mateo Musacchio.

Hakan Calhanoglu had the next effort in the game as he opened fire from 25 yards, but his strike was palmed over by Andrea Consigli.

Consigli was called into action in the 20th minute as a whipped free-kick from the left side evaded everyone but was well parried by the 31-year-old.

Suso, who was a lively presence in the opening part of the game, then tested Consigli with a curling low effort which again was well parried.

The Rossoneri continued to push, and the Sassuolo keeper was forced into a save with his legs from close range after Kessie had made a driving run in the box.

Politano tested Gianluigi Donnarumma with a low effort, and up the other end a deflected cross from Giacomo Bonaventura brought another save out of Consigli.

The visitors sat deep in the second-half and looked to frustrate Gennaro Gattuso’s side as expected, though they did have their own chance in the 64th minute as Ragusa cut in and sent a weak effort at Donnarumma.

As Milan struggled to manufacture clear-cut chances, Calhanoglu was the next to try his luck in the 70th minute, but he dragged his shot wide of the near left post.

With 15 minutes to go Gattuso’s side were left stunned as Politano gave the visitors the lead. The midfielder brought the ball down well 20 yards out before firing a low drive into the bottom corner past an outstretched Donnarumma.

Substitute Nikola Kalinic should have levelled the game with just over six minutes left with a free header inside the box, yet he managed to power his effort way over the bar.

However, the former Fiorentina man would redeem himself moments later with a sublime equaliser; turning on the penalty spot and blasting an effort in off the crossbar for his second goal in just 20 matches.

Kalinic could have then stolen all three points for the Rossoneri with a header from a corner in added time, though he couldn’t get the direction on his effort and Consigli saved.

Consigli was called into action one more time as Bonaventura launched a half-volley that was destined for the far corner, but the keeper was equal to it.