AC Milan slipped to a 2-1 home defeat in the Europa League against Real Betis on Thursday evening at San Siro.

They were outplayed for large parts of the game by their Spanish opponents, who led through an Antonio Sanabria tap-in and a screamer from Giovanni Lo Celso.

Patrick Cutrone did give the Rossoneri late hope when he made it 2-1, and Milan were denied seemingly a stone wall penalty late on before Samu Castillejo was sent off.

The result means Gennaro Gattuso’s side slip to second in the group, one point behind Betis and two ahead of Olympiacos with three games to play.

The visiting side had their first real chance in the 17th minute when a back-post header from Sanabria dropped wide of Pepe Reina’s far right post.

Gonzalo Higuain could have done better with his flicked header from Samu Castillejo’s cross minutes later, but he couldn’t generate the power or direction.

Just before the half-hour mark Milan fell a goal behind. Giovanni Lo Celso was allowed to get to the byline and pull back a low cross, which Sanabria bundled in at the near post past Reina.

Sanabria thought he had a second goal just minutes later when he bundled home a rebound from close range, however the linesman’s flag was up for offside, though the replay showed it to be a very close call.

The Betis striker could have had another not long after that, as Lo Celso was again provider of a teasing cross, though this time the No.9 fired over from inside the area with the goal gaping.

Higuain found himself through on goal in the closing stages of the first half, but after rounding Pau Lopez he had too tight an angle to convert and the tackle was made. A confrontation followed between the defender and the Argentine which saw the latter booked.

The LaLiga side continued to have the better of the play in the early stages of the second-half, going close through a Lo Celso shot before Junior fired wide from just outside the penalty area. 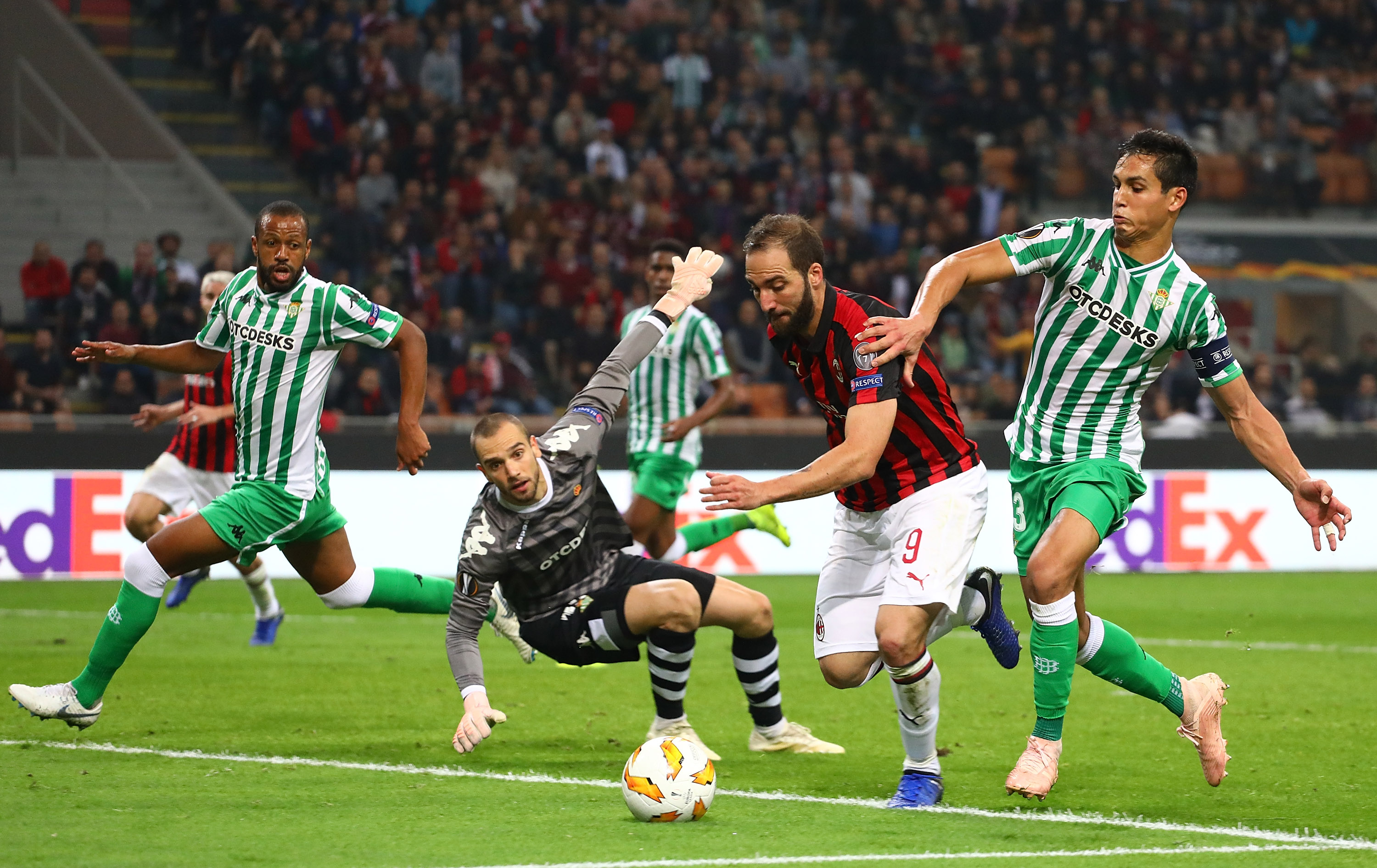 They did get the second goal their dominance deserved in the 55th minute through Lo Celso. The on-loan PSG man curled a spectacular effort in off the far post from 25 yards out, with Reina nowhere near the attempt.

Castillejo almost dragged the Rossoneri back into the game inside the final 20 minutes, though his shot from 25 yards hit the inside of the post and bounced to safety.

Substitute Cutrone netted yet another goal in the Europa League with eight minutes to go, slotting home decisively from a nice Castillejo feed to halve the deficit.

Milan had a late penalty appeal rejected as Castillejo was brought down by Barta, with replays suggesting a spot kick should have been awarded.

However, Castillejo was then shown a red card in the fourth minute of added time for a reckless sliding challenge.