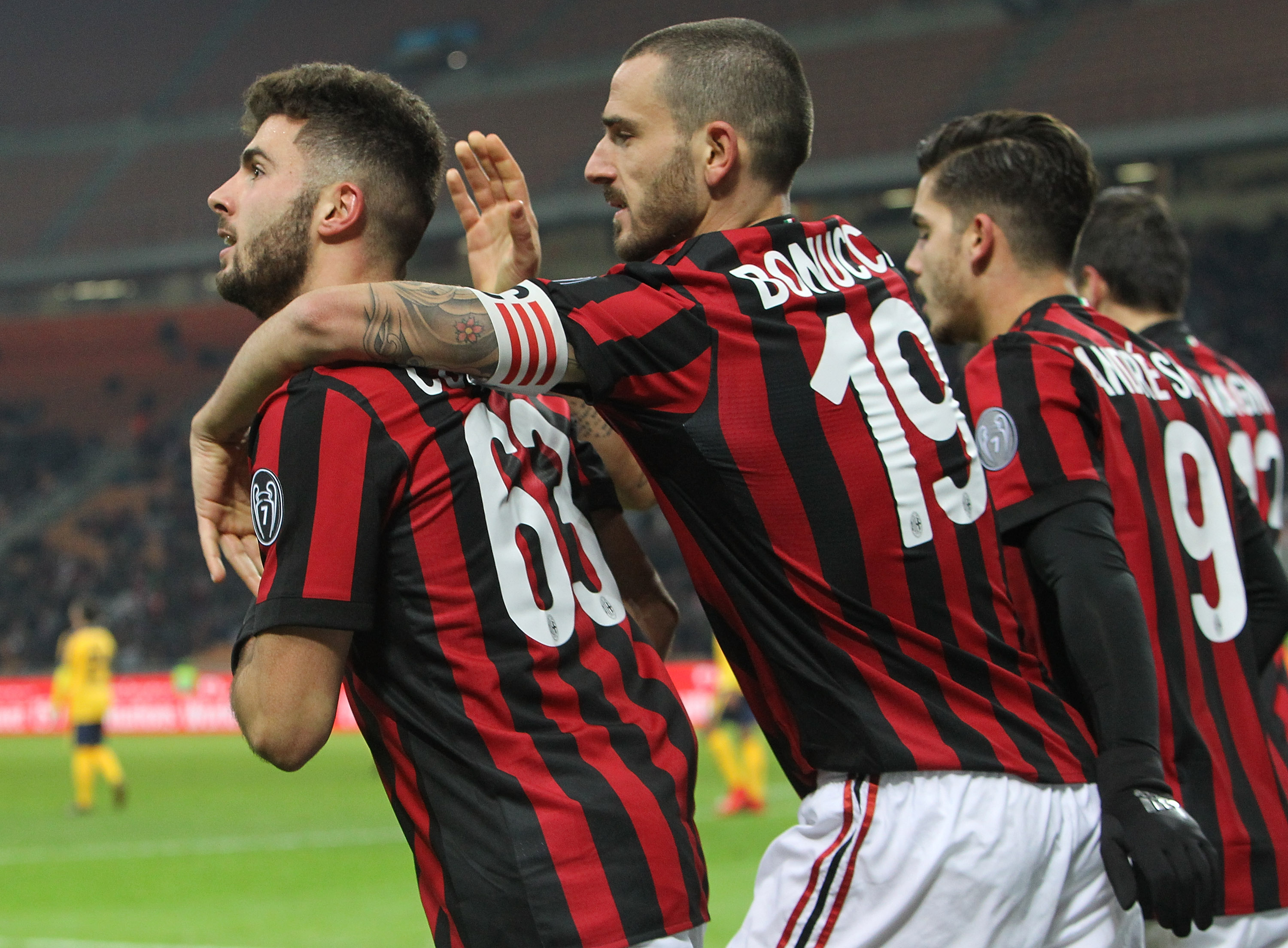 AC Milan set up a quarter-final match up with rivals Inter by comprehensively beating Hellas Verona 3-0 at San Siro in the Coppa Italia.

First half goals from Suso and Alessio Romagnoli sent the Rossoneri on their way to a comfortable last-32 win over Hellas, while Patrick Cutrone added the icing on the cake with a superb third goal.

Milan’s victory sets up a tantalising last-16 match against their city rivals, with the one-leg tie to be played on either December 27 or January 3 – with the Rossoneri as the designated ‘home team’.

The home side in Wednesday’s match went close twice in the opening ten minutes, firstly through a trickling ball in behind the Patrick Cutrone just failed to latch onto, then Giacomo Bonaventura curled an effort narrowly wide.

Riccardo Montolivo found space 25 yards out in the 21st minute before launching a shot towards the bottom corner, but the Hellas ‘keeper Marco Silvestri saved well down low.

Moments later Milan did take the lead. Suso received the ball on the right side before cutting onto his left foot and whipping in a teasing cross, however it evaded both Bonaventura and Cutrone and nestled in the far corner to make it 1-0 midway through the first half.

Not long later it was 2-0 to the home side and it came from an unlikely source. A ball to the far post was volleyed back across goal by Andre Silva, where Romagnoli was on hand to turn in from two yards and give the Rossoneri a commanding lead.

Cutrone came close with the last chance of the first half, lashing a shot at Silvestri’s near post which was well saved.

The headlines at half time were not about the team’s performance, but rather the pictures from Rai Sport of Gianluigi Donnarumma in tears in the locker room having been affected by the reaction of the Curva Sud. His name was jeered pre-match amid more reports that he will be leaving the club.

Within ten minutes of the restart, Milan’s young striker did get on the scoresheet. Suso once again cut in on his left foot and whipped in another teasing delivery, which Cutrone rose to meet, glancing a perfect header into the top corner to make it 3-0 and effectively kill the tie.

In the 72rd minute it should have been 3-0. Suso led a counter-attack for Gattuso’s side before finding Cutrone, whose shot deflected into the path of Kessie, but the Ivorian blazed over from about eight yards.

Milan went close to adding a fourth in the closing stages through Lucas Biglia, who hit the bar with a curling effort from distance. Kessie also had another opportunity after finding himself in behind the defence, but his shot was straight at Silvestri from close range.