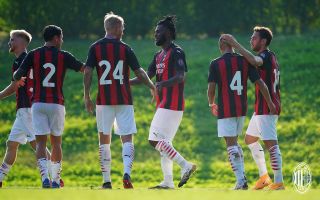 Milan 3-1 Brescia: All the highlights as Colombo scores again and Tonali makes debut

AC Milan rounded off their preseason preparations with a 3-1 win over newly-relegated Brescia at Milanello on Saturday afternoon.

Having originally had a friendly against ChievoVerona scheduled for Sunday, the Rossoneri had to cancel it due to COVID fears, but promptly arranged a replacement against their Lombardy neighbours Brescia.

It took Milan until the 41st minute to break the deadlock despite a probing and enterprising first half performance, with Franck Kessie in the end heading home from a corner at the near post.

⚽ The opener from Kessie.

Lorenzo Colombo then made it three goals in the preseason games not long after the break, converting from close range after a ricochet inside the area, with the last touch – and therefore the assist – coming off Castillejo.

Castillejo then got his goal on the hour mark, showing great strength to ride a challenge before shifting onto his left foot and finishing well.

💪 Great work by the Spaniard to make it three.

The away side would get a goal back through Ghezzi, but that did not detract from the fact that Sandro Tonali had come on moments before for his debut against his old side.

Ultimately though there would be no more notable action as the Rossoneri confirmed their 100% record in preseason ahead of Thursday’s Europa League qualifier against Shamrock Rovers.