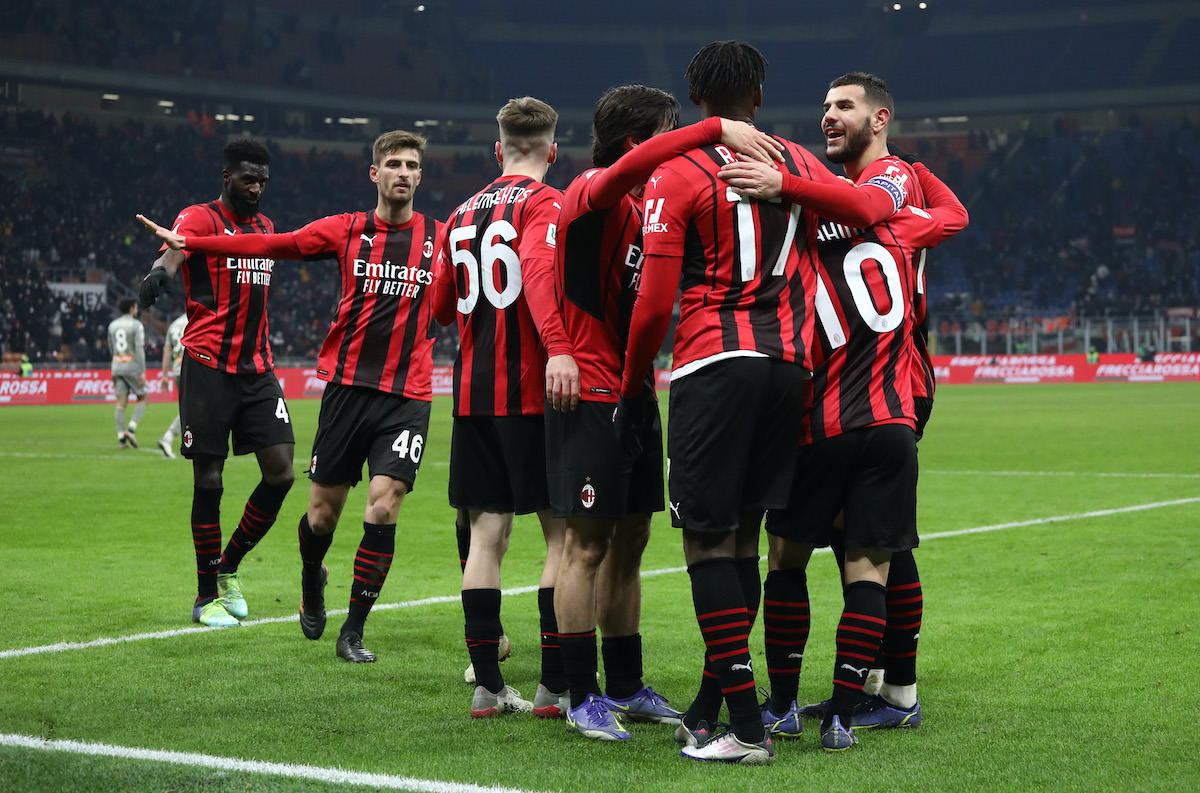 AC Milan edged past a resilient Genoa to reach the quarter final of the Coppa Italia, needing more than 90 minutes for the third year in a row, to complete a comeback at San Siro.

A lethargic and largely underwhelming first half performance proved problematic for Milan, with Genoa taking a deserved 1-0 lead into half-time following a header from debutant Leo Ostigard.

Genoa, fighting on behalf of Andriy Shevchenko whose job appears to be on the line after just ten games in charge, maintained their lead deep into the second half, but eventually succumbed to Milan pressure as the hosts pulled level after 74 minutes.

The visitors just about managed to force the game into extra time, but the hosts kept knocking as a stacked substitutes bench prevailed, with Rafael Leao bagging the winner in fortunate style after 104 minutes, and Alexis Saelemaekers tying it up after 112 minutes.

Stefano Pioli decided on a handful of changes to his starting XI, as Ante Rebic made his first start since October and Fikayo Tomori returned following a layoff with Covid-19. Sandro Tonali retained his place in the side, partnering Rade Krunic in the knowledge that he will be serving a suspension against Spezia on Monday. Daniel Maldini was also brought into the XI, making his Coppa Italia debut almost 37 years after his father Paolo did so, also against Il Grifone.

Milan started in somewhat timid fashion and did give the visitors chances to advance with the ball, but evaded any immediate calamities. Krunic came close after 11 minutes, flicking a corner from Junior Messias onto the crossbar.

Ironically, it was a corner that saw Genoa draw first blood some five minutes later, when new signing Ostigard powerfully headed in the opener on his debut to make it 1-0, capitalising on poor marking. The corner came as a result of some already sluggish closing down from Milan, as Dinho Vanheusden was allowed to unleash a low shot towards goal, which was forced behind by Mike Maignan.

The Rossoneri struggled to find any defensive cohesion, and when Tomori was forced off and replaced by Alessandro Florenzi after 22 minutes, things didn’t let up, with Shevchenko’s side again looking threatening from corners.

There was a worrying lack of urgency and care from Pioli’s men in the first half, even after conceding the opener. Too many passes went stray and Milan’s forwards failed to threaten the goal, with Maldini and Olivier Giroud left with little to no service. Genoa kept knocking, however, and outran the hosts to force opportunities from little.

Another corner almost caught out Milan in the 26th minute when new Genoa signing Kelvin Yeboah beat Maignan in the air, but couldn’t hit the target. Genoa continued to harrow and hunt down possession, bullying a timid Milan who, truthfully, looked desperate for the half-time whistle.

It probably should have been 2-0 heading into the break. Caleb Ekuban kept a backtracking Matteo Gabbia under pressure in the Milan box, winning the ball back in the area and squaring for Manolo Portanova, who couldn’t flick the shot on target.

Genoa were quick out of the traps yet again after the break, smashing their way through Milan to create another chance. Ekuban burst into the box once more and, with a touch of fortune, beat Florenzi to send the ball in the way of Portanova once more, who failed to convert another favourable chance.

Milan tried to respond almost instantly. Giroud was able to win the header from a free-kick launched into the Genoa box and his flick on was met by an eventually offside Gabbia, who was denied anyway by some fine, last-ditch goalkeeping from Adrian Semper.

After a brief bright spell, however, Genoa began to tire and Milan began to assert themselves, holding possession with more quality and pushing their full backs higher up the field to keep Shevchenko’s resilient side pinned back. Maldini began to find more of the ball and, after 57 minutes, smartly dummied a low cross from the right for Giroud, but the Frenchman passed up on the opportunity to shoot and tried forcing another pass, proving wasteful.

Passes came quicker and runs looked more fluid for Milan as the hour mark approached. Genoa continued to hang on, fitting as their head coach was desperate for the result to stick in order to hang onto his job, but attacks were becoming less frequent.

Being able to push the full backs higher and wider eventually proved dividends for Milan as Genoa finally caved. Hernandez lashed in a cross for Giroud, who headed into the top corner for 1-1 with little over 15 minutes of normal time to play, scoring his first Coppa Italia goal with what felt like his first genuine chance.

Milan chased down a winner inside 90 minutes, but failed to find it as Genoa hung on to take the game to extra time.

Leao looked at his scintillating best whenever he received the ball and almost pulled his side ahead straight away in extra time, slipping a shot low and forcing Semper into a full-stretch save after 93 minutes. Saelemaekers came close shortly after, as Milan ramped up the pressure and overloaded once more.

Genoa, for as well as they did in limiting Milan to half chances for so long, were now beginning to defend a little more desperately. Finally, though, it was Leao to break the deadlock in stunning fashion after 103 minutes, albeit with a slice of luck.

Breaking down the left flank, the Portugal international’s sliced cross did enough to catch out Semper in the middle of the goal and dip into the net somewhat farcically, giving Milan a deserved lead.

Saelemaekers sealed the victory with Milan’s third after 112 minutes, tapping home a cut back from Hernandez to secure a spot in the last eight in what was eventually a convincing win.

The win secures Milan’s place in the quarter-finals of the competition, where they will face the winner of Lazio against Udinese.