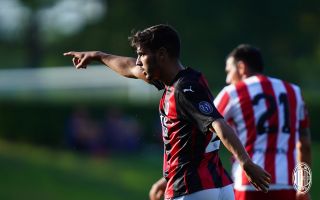 Milan 5-1 Vicenza: All the highlights and key details as Brahim Diaz, Colombo net

Milan continued their pre-season campaign with yet another win this afternoon, taking on Serie B side Vicenza at Milanello. The Rossoneri managed to score a whopping five goals and comfortably secured the win.

Samu Castillejo opened the scoring early with a nice finish, picked out by Hakan Calhanoglu who recently returned from international duty. The Spaniard finished with his right foot and gave the goalkeeper no chance.

💪 Composed finish by Castillejo with his right foot. #MilanVicenza 1-0.

Just ten minutes later, Lorenzo Colombo doubled the lead after making the most of a Calhanoglu corner, finishing well on the volley. The youngster replaced Zlatan Ibrahimovic and certainly did a good job up front.

👏 Colombo does well to get a shot away and doubles the lead. #MilanVicenza 2-0.

Castillejo decided that he wasn’t done just yet and added a third goal to Milan’s tally, assisted by Theo Hernandez who managed to pick him out on the edge of the box. The Spaniard picked out a small gap and the goalkeeper had no chance.

2️⃣ Castillejo scores his second of the game with a nice finish.#MilanVicenza 3-0.

Just before the second half kicked off, Stefan Pioli decided to make some changes, bringing on Antonio Donnarumma, Pierre Kalulu, Diego Laxalt, Lucas Paqueta and Brahim Diaz. The latter went on two contribute a lot.

Vicenzo did, however, managed to score a consolation goal in the 55th minute as a shot was deflected, leaving Donnarumma stranded in goal. Fortunately, Diaz restored the lead 20 minutes later with a nice finish after combining with Paqueta.

And just before the final whistle, in the last seconds of the game, youngster Luca Stanga extended the lead with a nice header from close range. Diaz was responsible for the assist and looked bright during today’s clash.

💪 Luca Stanga with the final goal of the game, Brahim Diaz assist. #MilanVicenza 5-1.