Milan 6-0 Shkendija: One foot in the group as Rossoneri run riot

AC Milan put one foot firmly in the group stages of the Europa League with a dominant 6-0 win over FK Shkendija.

Andre Silva and Riccardo Montolivo both bagged braces, while goals from Fabio Borini and Luca Antonelli ensured that Vincenzo Montella’s side will take a firm advantage to Macedonia in a week’s time.

The home side started the game on top as Franck Kessie then found space on the right side of the box in the early stages, however the Ivorian fired into the side netting from around 15 yards.

Milan did take the lead inside 13 minutes as Andre Silva scored his first competitive goal for the club. A blocked shot from Andrea Conti inside the box fell to Silva on the penalty spot, who curled inside the right post with pinpoint precision.

The chances for Shkendija were few and far between, but Besart Abdurahimi had an opportunity to test Donnarumma halfway through the first period with a half volley, but his effort went skyward.

The Macedonian outfit were made to pay as Milan doubled their advantage on the 25 minute mark. A Suso free-kick from 25 yards out was parried into the path of Riccardo Montolivo, who tucked home from a narrow angle to make it 2-0.

Andre Silva would compound the misery two minutes later with a fantastic show of strength. Calhanoglu found him inside the box with a curling low ball before to Portugal international spun the defender and slotted past the ‘keeper from close range to make it 3-0.

It could have been four just moments later when Calhanoglu fired over from a Fabio Borini feed; the visiting side completely overwhelmed. At the other end, Marjan Radeski fired a dangerous low ball across goal that was begging for a touch and a resulting away goal.

Calhanoglu continued to dictate the attacking play for Milan and provided a teasing ball for Kessie ten minutes before the break; a slight touch taking the ball for a corner which Leonardo Bonucci almost headed into the top right corner.

In the opening stages of the second half Milan began on top once again as a blocked Kessie shot resulted in a corner from which Andre Silva hit the inside of the post with a reaction shot.

In comparison to the first half, the second was not quite as frantic, but Calhanoglu should have scored with his last kick before being substituted as he slotted a feed from Borini wide.

Shkendija had their best spell of the game just after the hour mark as an Ibraimi shot was deflected narrowly wide for a corner, that coming after a well-worked corner routine had caused panic.

At the other end they would yet again be punished as Borini got his first competitive Milan goal, slotting home a feed from Conti from inside the area that was scuffed into his path by Andre Silva.

On the next attack it would be 5-0; a low shot from Suso was parried helplessly into the path of Antonelli, who had the easy task of tapping home from a yard. 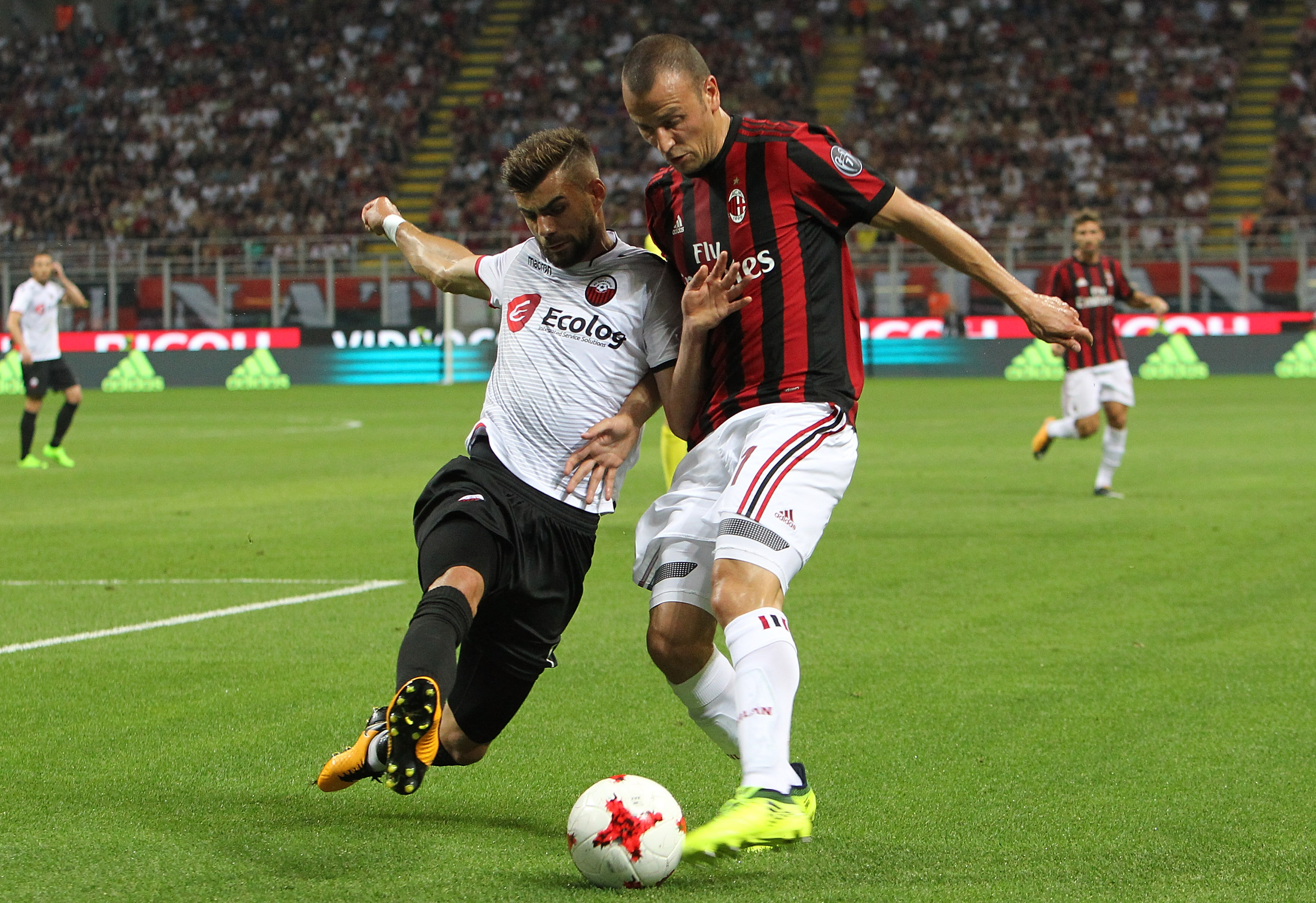 Andre Silva should have had a hat-trick not long after, only the heroics of Kostadin Zahov denied the former Porto man’s close range back heel as the Rossoneri ran riot.

A sixth goal would not have flattered Milan, but after substitute Patrick Cutrone hit the post it appeared it would not arrive.

Montolivo on the other hand had different ideas as he bagged his second of the game with less than five minutes left, turning well on the edge of the box before unleashing a venomous low shot that beat Zahov at his far post.

Andre Silva could have added a seventh in the final moments but again the visiting ‘keeper produced a smart close-range save to deny a hat-trick.

Giacomo Bonaventura, who came off the bench, was forced off with a late injury in what was the only negative of a good night’s work for Milan.

Tags AC Milan Italy Milan Milan Shkendija News Rossoneri Serie A
Related Articles
Tonali reveals his boyhood idol and the first Milan player’s shirt he got
4 December 2022, 12:13
CM: One month before Milan are back in action – from recoveries to the Dubai retreat
4 December 2022, 11:55
SM: Milan working on January deals for Chelsea winger and Lyon playmaker – the situation
4 December 2022, 11:35
Serie A Standings