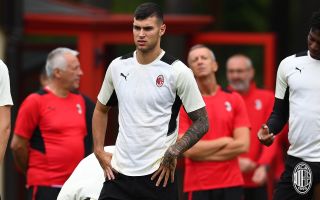 MilanNews confirms the earlier reports stating that at Casa Milan there was a meeting between the Rossoneri management and Riso, Pietro Pellegri’s agent, to take stock of the future of the Monaco-owned forward.

Offers have arrived for the 21-year-old despite what has been a difficult first half of the season due ti injuries, with Torino and Genoa both expressing an interest in signing him. However, there was also talk of signing him permanently from Monaco by triggering the option to buy as Paolo Maldini believes in him.

Calciomercato.com also report that Milan are considering the idea of signing him for €6m and sending him elsewhere on loan to find some continuous playing time, but there is also the possibility that an agreement is found with Monaco to essentially shift his loan on to another club.

It was a first interlocutory meeting and in the coming weeks there will be more to understand the best course of action.

READ MORE: Milan expecting a decision from Kessie regarding renewal by March