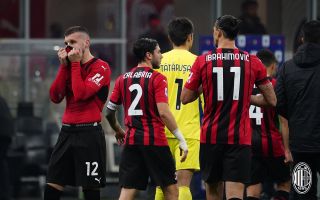 Among the positives from last night’s draw between AC Milan and Inter at San Siro was the long-awaited return of Ante Rebic after a few games out.

The Croatian forward sustained an ankle problem in the first half of Milan’s 3-2 comeback win over Verona, and last night he returned to the field in the derby against Inter playing a full half hour in his natural role as left winger, providing a big energy boost.

MilanNews writes how Milan now have one of their biggest weapons back as the left wing is looking very solid. Rafael Leao continues to have an excellent start to the season but Rebic’s injury forced him to work overtime. Against Inter we already had a taste of how significant Rebic’s presence can be for Milan as he had that dogged determination to battle for every ball and make something happen.

Prior to his injury we had seen the former Eintracht Frankfurt man finally become decisive in the first half of the season having only truly hit his heights in the second half of the 2019-20 and 2020-21 campaigns.

He will now be keen on putting all his talent on the field more consistently than in the past such as his explosive strength and technique. With Ante fit and firing, the Rossoneri have one more devastating weapon to aim for the Scudetto.