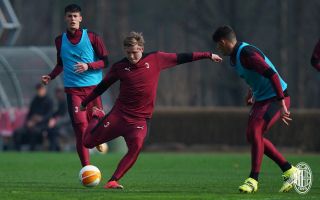 AC Milan got back to work at Milanello on Monday morning, trying to run off Sunday’s derby defeat against Inter at San Siro.

It was not an ideal afternoon for the Rossoneri as they lost valuable ground to their city rivals in the title race with Lautaro Martinez and Romelu Lukaku firing the Nerazzurri to a 3-0 victory, their fourth in the last five derbies in all competitions.

As the official website reports, preparations began for the next match on Thursday night which will see the Rossoneri take on Red Star in the second leg of their Europa League Round of 32 clash, with the first leg having ended 2-2.

Paolo Maldini and Frederic Massara were in attendance as work took place in the gym first of all and then the players involved in yesterday’s match had a recovery session. The rest of the team played a friendly against the Primavera, which ended 2-0 to the ‘first team’.