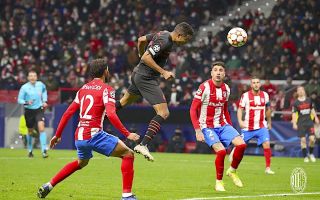 CM: Maldini, Massara and Pioli all believe in Messias – the full details of the deal with Crotone

Junior Messias’ first goal for AC Milan could hardly have come at a better time as he scored the winner against Atletico Madrid to keep the Rossoneri in the Champions League.

It marks another remarkable chapter in Messias’ inspiring story as he has gone from playing amateur football and in the fourth division three years ago to winning a Champions League game in front of over 2,000 Rossoneri fans who made the trip to the Spanish capital and were willing him on.

According to Calciomercato.com, directors Paolo Maldini and Ricky Massara have always been convinced that they completed a fantastic operation with Crotone for Messias, who arrived on deadline day from the Serie B side.

The formula is as follows: a paid loan at a cost of €2.6m, with an option to buy set at €5.4m plus €1m in potential bonuses for a total that could therefore reach €9m. The feeling is that yesterday’s goal is just the start for the Brazilian.

Stefano Pioli is also convinced by the qualities of the 30-year-old and will now be able to count on a player who has very different characteristics compared to the other forwards in the squad.