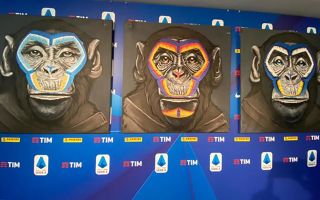 AC Milan have released an official statement expressing their strong disagreement at Serie A’s decision to use pictures of monkeys as part of a ‘fight against racism’.

Lega Serie A officially unveiled on Monday their series of anti-racism initiatives, which began with the exhibition of three controversial pieces of art from Simone Fugazzotto.

Fugazzotto is known for using chimps and apes in his artwork, however it has caused understandable backlash from the footballing world and beyond.

Roma were once again the first to speak out about the campaign, claiming that they ‘understand’ the league’s desire to tackle racism but insisting that the pictures are the wrong way to go about it.

Now, the Rossoneri have backed up their Serie A rivals by blasting the Lega for a ‘total lack of consultation’, essentially distancing themselves from the use of the artwork.

#ASRoma was very surprised to see what appears to be an anti-racist campaign from Serie A featuring painted monkeys on social media today. We understand the league wants to tackle racism but we don’t believe this is the right way to do it. pic.twitter.com/jVLImrgS0y

In addition, every club has put forward their own ambassador for the the Anti-Racism Team, as Football Italia notes. They are as follows…

Art can be powerful, but we strongly disagree with the use of monkeys as images in the fight against racism and were surprised by the total lack of consultation. @SerieA_EN pic.twitter.com/M7wFjhsfj2