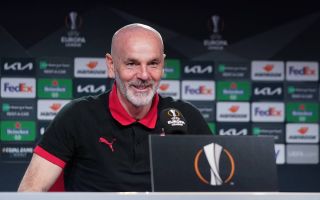 Stefano Pioli has revealed that Thursday’s final training session will be crucial to see if four players can feature against Manchester United.

The media headlines in the build-up to the second leg have been centred around which players Pioli may welcome back into the fold, as he has been without several key performers like Zlatan Ibrahimovic, Ismael Bennacer and others for a long time.

Pioli was interviewed by Sky Italia on the eve of the game against United, with his comments transcribed by MilanNews.

“It is clear that for our history, the history of the club, it makes us breathe that beautiful air and feel those beautiful flavours [Champions League]. It is a very stimulating match, the first leg was very balanced and hard fought, it leaves open to both teams the possibility of passing: we want to try to be the winners,” he said.

Have you talked in recent days with Maldini – who has faced United and beaten them – about the emotions and how to face such matches?

“With Paolo we talk about many things, when we face certain matches the situations experienced in the past can also help us, especially to pass on to our team. It is clear that unfortunately playing without fans changes a lot and certain emotions are experienced less. But we know how important and prestigious tomorrow’s match is so we are preparing in the best possible way.”

On the presence of Ibra on the pitch: “It is fundamental for the team, it is clear that with Zlatan we are stronger from many points of view, from personality to charisma to quality to position. Zlatan is fine, he’s ready, let’s see how to use him tomorrow.”

Is there a game in your journey at Milan that the team should refer to for tomorrow?

“We come from a week in which the first two games were excellent, both in Verona and in Manchester the team played as a team for 95 minutes, with quality, personality and rhythm. We must try to bring that level very close, indeed, try to overcome it because tomorrow’s opponents have strength, quality, personality and to try to beat them our level will have to be very high.”

Kjaer uttered nice words for you and your staff, is it nice to hear them from a player who has toured half of Europe?

“Absolutely yes, you have to try to be yourself, speak very frankly, that’s how I am. When I find in front of me similar people, who have great respect and give great availability, then it is easier to have better relationships.”

On the players recovered for United: “Surely recovering attacking players like Rashford gives them more quality and depth, they are an even stronger team than the first leg but we know them well, we know their characteristics, we know their way of being on the pitch so we have to try to be very careful and precise, and try to keep trying to put them in trouble when we have the ball.”