AC Milan are battling Chelsea and Atletico Madrid for the signing of Mohamed-Ali Cho as Angers may be forced to sell, a report claims.

Cho has certainly adapted to top flight football well as he has amassed 13 appearances in Ligue 1 for Angers, scoring twice and impressing plenty to say he is just 17 years of age and won’t turn 18 until January.

French source L’Equipe (via SportWitness) report that Angers are in a difficult financial situation that may force them to cash in on their prized asset and that is why an exit in the next summer window cannot be excluded.

Chelsea and Atletico Madrid showed their interest in the last summer market but Milan have been confirmed as having joined the clubs in the mix to sign the teenager, even scouting him personally in a recent France U21 game.

Interestingly, L’Equipe add that Cho has appointed a lawyer to look after his future who will work with his family to decide the right next step for his career. 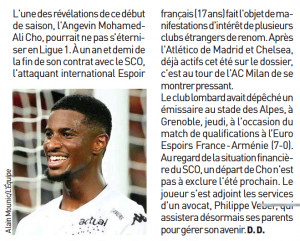