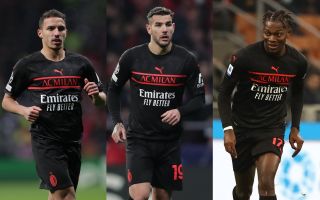 AC Milan are working hard on several renewals and have already announced those of Simon Kjaer, Alexis Saelemaekers and Stefano Pioli. They don’t want to repeat earlier mistakes, with three more renewals on the horizon.

There’s no doubt that Milan didn’t exactly enjoy the free transfers of Gigio Donnarumma and Hakan Calhanoglu this summer. Furthermore, the negotiations with Franck Kessie have turned out to be very difficult, with his contract expiring in the summer.

As a result of this, they have decided to renew their remaining key players very early, no matter the current deadline of the contract. Their goal, as reported by Tuttosport (via MilanNews), is to renew Ismael Bennacer, Rafael Leao and Theo Hernandez by Christmas.

All three will expire in 2024 but Milan feel that they deserve a pay raise immediately, which is true. By doing so, the Rossoneri would also get on very good terms with the players, reducing the risk of bad blood up the road.