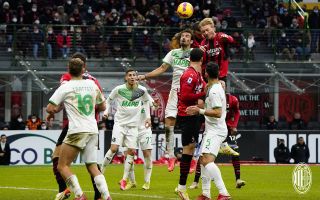 GdS: Milan must bounce back immediately and calm Pioli’s worries about defensive woes

It was always going to be difficult for AC Milan to keep up their excellent start to the season in the league, but the wheels have fallen off in the last couple of games.

La Gazzetta dello Sport (via MilanNews) questions how a team like Milan – one that is aiming for the Scudetto – could not even manage a single point from the games against Fiorentina and Sassuolo. To aggravate the situation even further is the fact that they conceded seven goals across the two matches, and Inter gained six points on the Rossoneri and are now breathing down their necks.

Stefano Pioli commented on the defeat after the game and was quick to jump on the idea that it might have been a physical and mental hangover from the win against Atletico Madrid in midweek.

“Europe has nothing to do with it. We have no justifications, we want to face the double commitment and maybe get through the round. We changed many players compared to Madrid but we weren’t lucid in our choices,” he said.

The Rossoneri coach also acknowledged that the number of goals conceded in the last two Serie A matches is not good at all: “Defensively there is something to fix: when I say that seven goals are too many, it’s like saying I’m worried.”

Fortunately, there is not even much time to think about the defeat because Milan will be back in action on Wednesday against Shevchenko’s Genoa, and the return of Fikayo Tomori should provide a boost to a back line that must be low on confidence right now.