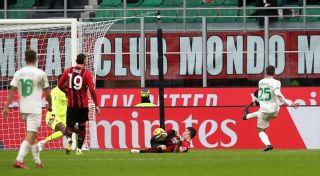 AC Milan were not anywhere close to the levels that they have set during Sunday afternoon’s 3-1 defeat at home against Sassuolo, and now a response is needed.

MilanNews writes how all three goals conceded were full of mistakes, but in particular the ones that stand out are how Tiemoue Bakayoko gave the ball away for the equaliser, Franck Kessie surrendered possession for the 3-1 goal and before Domenico Berardi netted Alessio Romagnoli came under the magnifying glass for weak defending.

Several players had regained the chance to play as starters after some time but now doubt head coach Stefano Pioli would have expected much more and the answers they gave show why he relies more and more on the same players, especially in midfield where the overall performance of the Tonali-Kessie double pivot was streets ahead of Bennacer-Bakayoko.

Now Milan need to amass six points against Genoa and Salernitana to resume their momentum and there is one eye on the game on 19 December against Napoli, which the Diavolo risk facing in a lot more difficulty than was imagined two weeks ago.

READ MORE: Sky journalist outlines why Romagnoli’s errors must be ‘contextualised’ and what may have generated ‘insecurity’