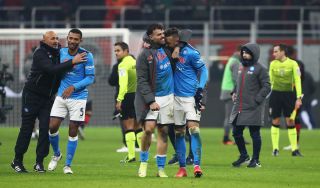 CorSera: Early-season dominant Milan has disappeared – no rhythm or intensity vs. Napoli

AC Milan were unable to provide answers to their recent drop in form as they were beaten 1-0 by Napoli at San Siro last night, a report claims.

This morning’s edition of il Corriere della Sera (via MilanNews) writes how last night’s result is just another indication that the Milan side that were so dominant at the beginning of the season has unfortunately disappeared. Stefano Pioli simply has too many injuries to try and deal with, and as a result the Rossoneri are no longer able to play as they did in the first few rounds when they were practically unbeatable and now they continue to drop points.

There is great disappointment of course after another poor performance, but also a lot of anger over the final incident of the game where Kessie’s goal was overruled. At the same time there is also the awareness of no longer being the team that showed intensity and rhythm, and one that is feeling the absences of Kjaer, Calabria, Theo Hernandez, Rebic and Leao.

Many players are also tired or still in poor condition and so the real Milan can no longer be seen. Now it will be up to Pioli to find the antidote, and fast.

READ MORE: Pioli believes Milan played ‘one of the best games’ in Napoli loss and hits out at offside call