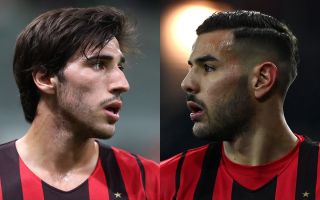 AC Milan secured all three points in their game against Roma and although it was nearly a perfect game for the Rossoneri, there were a few negatives. As a result of his booking, Theo Hernandez must be careful.

The left-back was booked after a row erupted between him and Rick Karsdorp. This means that he’s now on four bookings, with five resulting in a one-game suspension. Not the best scenario with Juventus and Inter coming up after Venezia and Spezia.

On the other hand, he did get Karsdorp sent off in the end. Furthermore, he could take a tactical yellow card tomorrow and thus miss the game against Spezia. If that doesn’t happen, though, he will have to be very careful.

The same goes for Sandro Tonali, who’s also on four bookings right now. It remains to be seen if they will be carded tomorrow. The depth situation is tough as it is, so it would be far from ideal not to have them against Spezia either.