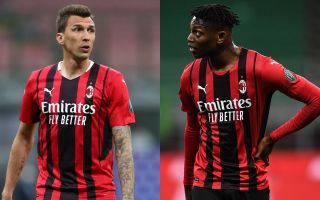 Ante Rebic is struggling with a minor injury and could be forced to start on the bench tomorrow. This would prompt a change to Milan’s starting XI for the game against Atalanta, which two options available.

Rebic has played in the centre-forward role in the last few games, replacing the injured Zlatan Ibrahimovic. He has done well as he scored against Juventus and bagged a hat-trick against Torino, though failing to get on target against Cagliari.

For tomorrow’s game, he’s in doubt due to a calf injury and it seems he will start the clash on the bench. On our Twitter, we put up a poll on who should replace the No.12 between Mario Mandzukic and Rafael Leao.

🤔 If Rebic can't make it from the first minute tomorrow, who would you replace him with? 🇭🇷🇵🇹

Mandzukic won the poll, as you can see, with 58% of the votes and it remains to be seen if he will get the chance. The most likely scenario is that Leao starts, seeing as he did well against Cagliari and is in a better physical condition.