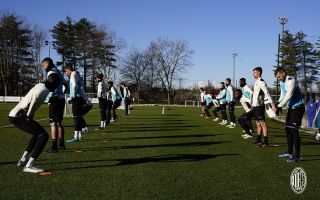 Some good news has emerged from Milanello regarding the defensive situation while some clues have emerged about the team that might face Genoa.

Starting with the positive note, MilanNews reports that Fikayo Tomori trained with the rest of the squad and therefore seems to be in contention for the game on Thursday night at San Siro in the Coppa Italia.

Zlatan Ibrahimovic did a personalised workout as planned given he is suspended for the game, with his weekly programmes nw split between gym and the field, while Alessandro Florenzi did half of training with the squad and half on his own.

Matteo Gabbia trained regularly despite the rumours that Sampdoria are pushing to close his signature on a loan deal, but as per the report he will only leave after the arrival of another central defender.

Regarding the choices for Thursday, Alexis Saelemaekers, Daniel Maldini, Ante Rebic and Olivier Giroud could play from the first minute while in the midfield Tonali is certain of a place given his disqualification in the league against Spezia, with Krunic favored over Bakayoko to partner him.